The current predictions (as at 25th June 2020) call for an above average season, with a mean forecast of 17 named storms, 9 hurricanes and 4 major hurricanes.

More than 20 research groups, private companies and universities produce seasonal hurricane forecasts each year. The current predictions (as at 25th June 2020) call for an above average season, with a mean forecast of 17 named storms, 9 hurricanes, and 4 major hurricanes.

The spread in forecasts is lower than in recent years, with 65% predicting an extremely active season (9+ hurricanes). This is driven by El Niño–Southern Oscillation (ENSO) forecasts, which indicate that ENSO-neutral or LaNiña conditions will dominate this year, both of which are associated with above average activity (e.g. 2005, 2017).

These forecasts appear reliable so far, with the 2020 season already breaking records. It is the sixth year in a row with a named storm forming prior to June 1st. In fact, three systems have developed so far – Arthur (May 17th), Bertha (May 27th), and Cristobal (June 2nd). This makes 2020 unique, with no other Atlantic season on record with three named storms this early in the year.

In the Pacific Basin, ENSO-neutral and La-Niña conditions are associated with a smaller number of cyclones. As a result, forecasts indicate a below average season, with 26 tropical storms, 15 typhoons and 8 intense storms.

Table 1: 2020 Atlantic Hurricane Season Forecasts (as at 25th June). To date, 17 research groups, private companies, and universities have released forecasts. Predictions from three of the best-known forecasters are explicitly shown – NOAA, CSU and TSR. Not all 17 forecasts include a prediction for ACE, and so an ACE average is not provided.

The latest forecasts for the 2020 hurricane season are presented in Table 1 and Figure 1. These predictions are based on a range of data sources, including seasonal weather forecasts, statistical models, and key atmospheric indices such as the El Niño– Southern Oscillation (ENSO) and North Atlantic Oscillation (NAO).

Current predictions call for an above average season, with a mean forecast of 17 named storms, 9 hurricanes, and 4 major hurricanes (Table 1). The spread in forecasts across the different research groups is lower than in recent years, with 65% predicting an extremely active season (9+ hurricanes). There are only two outliers – the UK Met Office and the European Centre for Medium Range Weather Forecasts, which are both predicting a near average season.

Note that the forecasts presented here are for basin-wide activity and not landfalling storms. Landfall activity depends on in-season weather patterns, which are often only predictable days or weeks in advance.

The strong consensus for an above average season is due to the latest ENSO forecasts (Figure 2). ENSO has a significant impact on tropical cyclone activity (see “What is ENSO?” breakout box). ENSOneutral (between -0.5°C and +0.5°C in Figure 2) and La- Niña (less than -0.5°C) conditions are associated with an above average North Atlantic hurricane season. 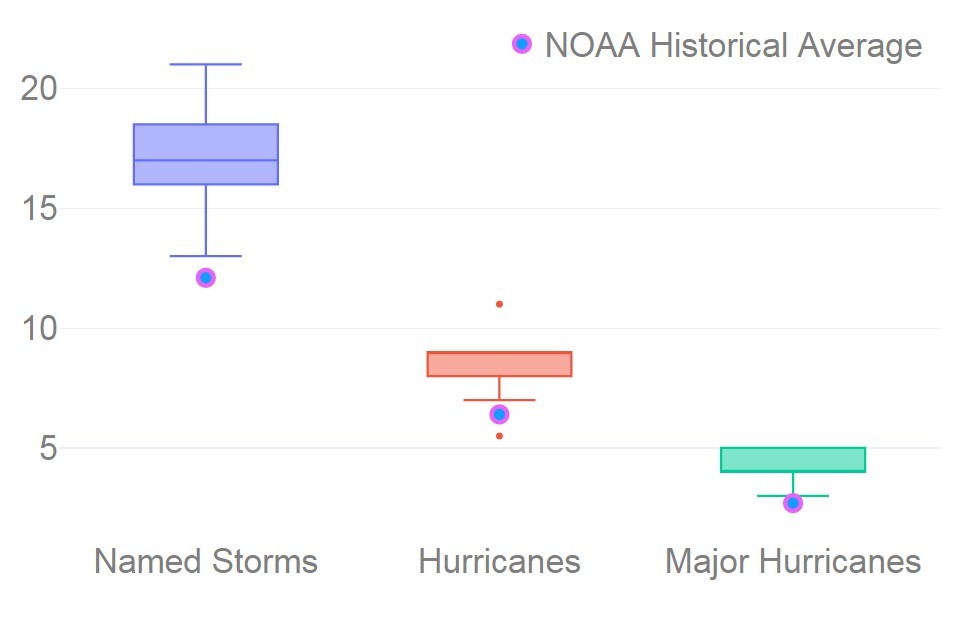 ENSO-neutral conditions are currently in place (Figure 2), with the majority of forecasts indicating that these conditions will persist for much of the Northern Hemisphere summer. The National Oceanic and Atmospheric Administration (NOAA) estimates a 48% probability of ENSO-neutral and 46% probability of La-Niña conditions for the peak of the North Atlantic season (August-October). There is a very low chance of El-Niño (6%), hence the consensus in hurricane forecasts for this year.

The North Atlantic hurricane forecasts appear reliable so far, with the 2020 season already breaking records. Three systems have developed – Arthur (May 17th), Bertha (May 27th), and Cristobal (June 2nd). It is the sixth season in a row with a named storm forming before the official start of the Atlantic season on 1st June. It is also the first year on record with three named storms this early in the year. On average the third system does not form until the second week of August1 , and so if early indications are anything to go by there could be an active season this year 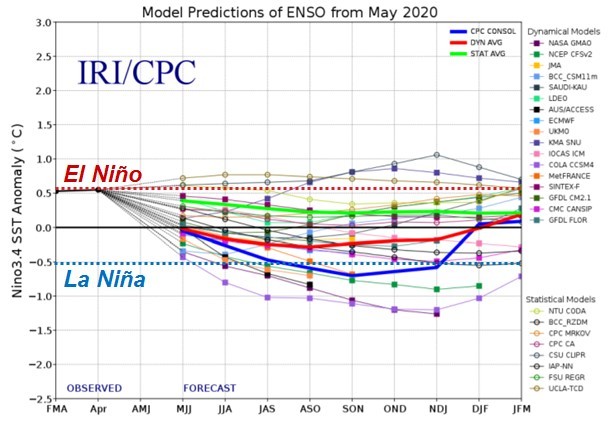 Most notably Hurricane Dorian, the 4th named storm of the season, caused devastation in the Caribbean after it remained stationary for almost 36 hours over the Bahamas3 . Insured losses from the storm have been estimated at $3.5 Billion, with the majority arising from the Bahamas4 . This makes Dorian the 4th largest insured loss for a natural catastrophe in 2019, after Typhoon Hagibis ($9Bln), Typhoon Faxi ($6Bln), and the Mississippi floods ($4Bln)4.

Another key event of the Atlantic season was Imelda which, despite only being classed as a Tropical Storm for a few hours, produced heavy rainfall and tornadoes over parts of Texas, Louisiana, and Oklahoma before dissipating in September5 . The estimated insured loss from Imelda was $1.2 Billion4.

The Western Pacific basin experienced near average activity, with 19 named storms and 16 hurricane-equivalent storms, including Hagibis and Faxi. Activity in the Eastern Pacific was slightly above average, with 19 named storms and 7 hurricanes. Notable events included Hurricane Lorena and Tropical Storm Narda, which both made landfall in Mexico. The 2019 Atlantic Hurricane Season saw basin activity above the long-term average, with 18 named storms, 6 hurricanes and 3 major hurricanes (Table 2).

In terms of forecasts, the actual number of hurricanes and major hurricanes in the North Atlantic was fairly close to the June 2019 predictions (Table 3); however, the forecasted number of named storms and the Accumulated Cyclone Energy (ACE) for the season were considerably lower than the recorded values; the average forecast of 13.1 named storms was 27% lower than the number recorded. The forecasted Accumulated Cyclone Energy (ACE)6 of was correctly above the historical average, but 12% lower than the observed value. In the Western Pacific basin, Tropical Storm Risk forecasted a slightly above average season, with 26 tropical storms, 17 typhoons and 10 intense storms, which agreed well with observations.

Do ENSO-neutral and La Niña increase US mainland landfall risk?

Yes – there is evidence that both ENSO Neutral and La Niña conditions increase activity in the North Atlantic basin, as well as the US landfall risk.

The North Atlantic historical record shows that on average there have been 7 hurricanes per year when the ENSO phase was neutral or negative since 1950. This decreases to 5 hurricanes per year during El Niño conditions – showing the clear suppression of activity due to increased wind shear. This pattern is observed for both Cat1-5 and Cat3-5 hurricanes (Figure 3).

In terms of landfall locations, there is some evidence that the probability of landfalls along the US East Coast (Georgia to Maine) is higher during La Niña years when wind shear is low, which allows storms to sustain intensities to higher latitudes8. 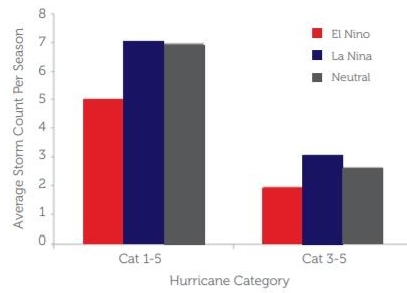 Figure 3: The average number of hurricanes in the Atlantic Basin per season since 1950, split by ENSO phase. Counts are shown for both all (Cat1-5) and Major (Cat3-5) hurricanes. The analysis was undertaken using the HURDAT2 dataset (https://www.aoml.noaa.gov/ hrd/hurdat/Data_Storm.html). 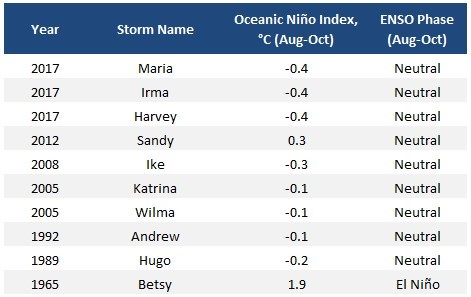 Table 4: Large US Hurricane losses since 1960 and the corresponding August-October ENSO phase. The Oceanic Niño Index (ONI) is the 3 month running mean of ERSST.v5 SST anomalies in the Niño 3.4 region, obtained from NOAA . The storms were selected based on insured losses, normalised to 2018 USD.

The El Niño-Southern Oscillation is a periodic climate pattern. It involves changes in the temperature of waters in the eastern and central tropical Pacific Ocean. On periods that range from three to seven years the surface water across areas of the Pacific Ocean warms or cools. This can range from 1°C to 3°C compared to average sea surface temperatures. The oscillating pattern of warming and cooling (ENSO cycle) impacts rainfall distribution across the tropics and can influence weather patterns across the world, including tropical cyclone activity.

There are three phases to the ENSO phenomenon. The two opposite phases, ‘El Niño’ and ‘La Niña’ are the extreme phases of the ENSO cycle and the third phase is called ENSO-neutral. The Neutral phase is where the sea surface temperatures in the Pacific Ocean are fairly close to average conditions.

ENSO influences tropical cyclone activity primarily via vertical wind shear, which refers to the change in wind speed and direction high up in the atmosphere (1,500-10,000 meters above the ground). Strong vertical wind shear tends to break down storms or prevent them from forming in the first place. 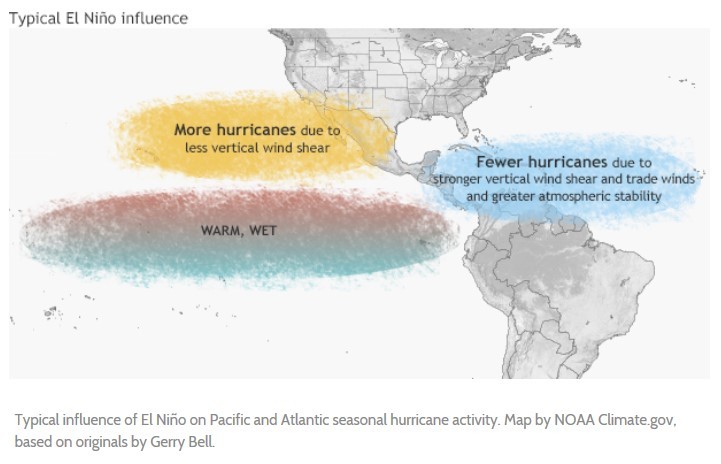 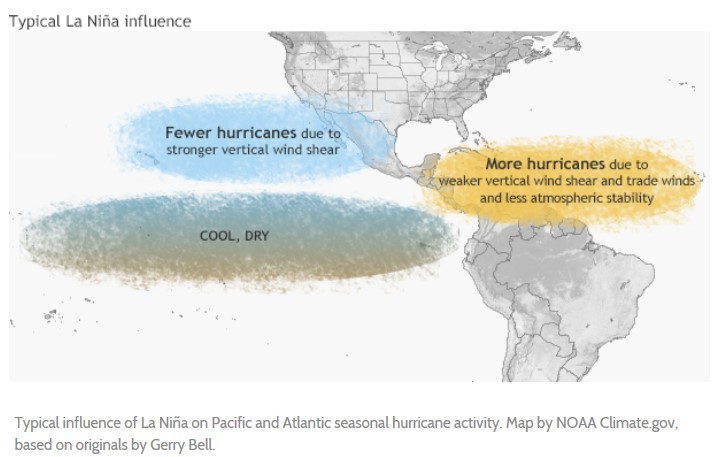 How reliable are the forecasts?

The accuracy of a particular prediction varies depending on how long before the start of the season it was generated, with those closer to the start of the season having higher accuracy. Figure 5 shows the skill of three forecasters over the period 2003-2015 – NOAA, Colorado State University, and Tropical Storm Risk. As can be seen, predictions issued in August generally have higher accuracy than predictions issued in May or June.

What about the Pacific basin?

Similar to the North Atlantic, forecasts for the Pacific basin are dependent on the state of ENSO. During ENSO-neutral and La-Niña years, a smaller number of cyclones form in the central Pacific, and these storms tend be less intense and have shorter durations10 . As a result, Tropical Storm Risk has forecast a below average season for 2020, with 26 tropical storms, 15 typhoons and 8 intense storms (compared to the historical average of 26, 16 and 9 respectively). Tropical Storm Risk note, however, that large uncertainty remains in this forecast, and ultimately it depends on how ENSO evolves during the year. 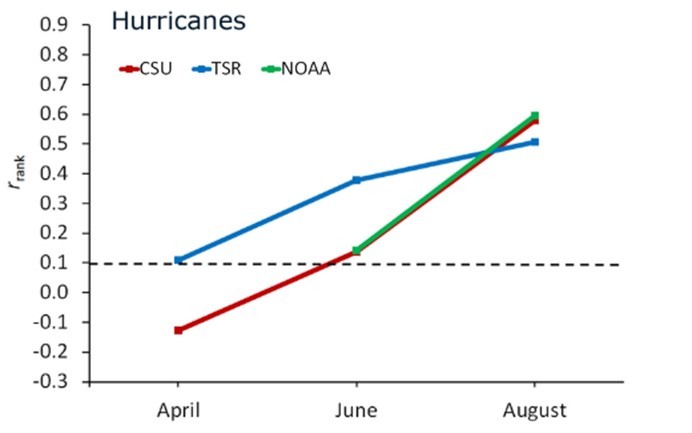 Figure 5: Skill scores for three different forecasting agencies for the period 2003-2015. A rank correlation (rrank) of 1 indicates a perfect prediction of the number of North Atlantic hurricanes. Source: http://seasonalhurricanepredictions.bsc.es/skill

What about climate change?

Scientific theory and computer modelling indicate that climate change will increase the intensity of tropical cyclones across the world, as well as the frequency of very intense storms (Category 4+)11. In addition, the risk from both inland and coastal flooding associated with tropical cyclones will increase due to greater rainfall and sea level rise.

But – what does this mean for 2020? The answer is complicated. While we know that climate change is likely to have played a role in recent tropical cyclones12, 13, large uncertainties remain around quantifying this role. In addition, changes in insured losses comprise not only climate change, but also exposure change and additional factors such as loss adjustment expenses. If hurricane Andrew were to reoccur today the loss would be larger. It is probable that climate change would contribute to this increase in loss, but Miami has also seen huge population growth since 1992 and this would certainly be a significant – if not the primary – factor. 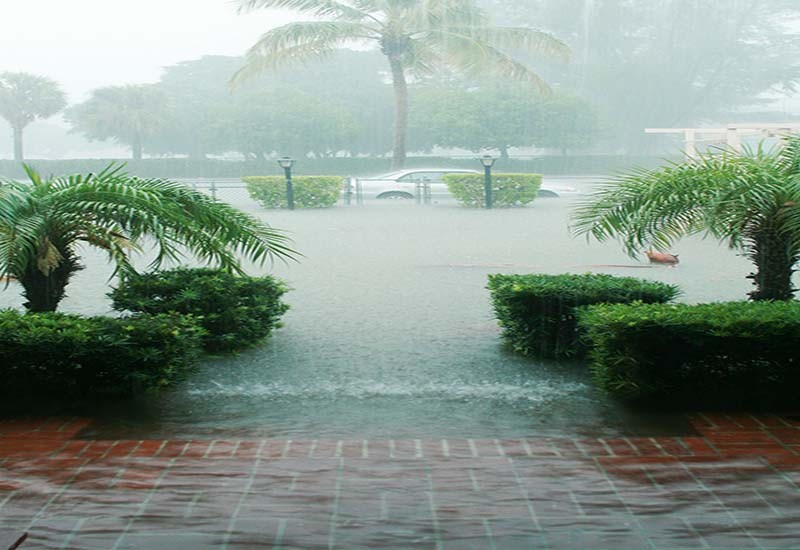 This research report has been prepared for information purposes only and is provided to you on the basis that it is not advice and should not be relied upon in making any decisions. The report has been prepared and issued by MS Amlin using information and data compiled from publicly available sources that MS Amlin believes to be reliable. However, MS Amlin cannot guarantee the accuracy or completeness of the information and data and have not sought for this information to be independently verified. MS Amlin makes no representation or warranty as to the accuracy or completeness of the information and data and shall not be responsible for any omissions or errors contained in it. This research report cannot be used as the basis of any claim or cause of action. Commentary and opinions contained in this report represent those of the author of this research report at the date of this report. Any forward looking statements or forecasts are based on assumptions or projections, forecasts and other uncertainties and other unknown risks and factors in the light of currently available information. The forecasts described in this report should be evaluated keeping those factors in mind.

To the fullest extent permitted by applicable law, MS Amlin shall not be liable for any direct, indirect or consequential losses, loss of profits, damages, costs or expenses suffered or incurred by any person arising out of or in connection with any use or reliance on any information contained in this research report.