New ship’s hull coatings promise to increase speed, reduce fuel consumption and eliminate marine growth. But how close are we to a shark skin-style hull?

A recent announcement from the US Navy’s Office of Naval Research gave us a tantalising glimpse of what might be possible when it comes to the coating of underwater hulls.

“A new type of ‘omniphobic’ (repel-all) coating has been developed by a team at Michigan University,” the press release announced. “The chemical is clear and durable, and can be applied to numerous types of surface by spraying, brushing, dipping or spin-coating. It binds tightly and is able to shed most liquids. It can also resist scratching and denting.”

It explained how the US Navy was particularly interested in coatings which would reduce the friction drag of its ships, submarines and new unmanned underwater vehicles, all of which could lead to huge savings in fuel.

But that discovery was back in 2018, and little has been published since. Despite repeated attempts to contact both the US Navy and the Michigan University developers, Chart magazine received no response. Perhaps the promised technology has since proved unsuccessful. Or is it possible it was so successful that it has since been made top secret?

Nevertheless, current anti-fouling technology is already very advanced. It works against unwelcome marine growth on ships’ hulls in one of two ways: either it kills it off or makes it slide off. These methods are often combined.

The problem for ship owners is that the effective (or proven) biocides of the past, mainly tributyltin compounds, are now widely banned throughout the world, and less-toxic versions have met with variable success.

That now seems to be changing, with some big advances in environmentally friendly coatings that encourage marine growth to settle elsewhere without impacting the ecology of the ocean.

These coatings include the oddly-named Selektope, manufactured by the Swedish company I-Tech AB. Their product is described as an “organic non-metal compound” which stimulates barnacle larvae to swim away, even if they don’t want to. The company claims that just a 0.1 per cent addition of this stimulator in a coating is enough to minimise the loss of speed from fouling to just two per cent over two years.

Other environmentally friendly coatings include those based on silicon (mainly used for propellers and stern gear) and even the return of the copper-clad ship’s bottom. UK-based Aquarius Marine Coatings, for example, has successfully rolled out pure copper epoxy suspension yacht coatings to the commercial sector. Whilst copper is a recognised biocide, its natural composition makes it acceptable under most of the current biocide regulations.

Other effective solutions have included ultrasonic waves that disrupt the growth of slime on hulls, and even peel-off films that are freshly applied at each dry-docking.

As for the elusive omniphobic solution from the US Navy, we will have to wait and see. If this fix-all solution is as good as it appears, then the coatings industry will probably breathe a sigh of relief that it seems to have disappeared from the market.

No one has yet commented, however, on whether US Navy ships currently seem to be sailing a bit further and faster on each load of fuel. 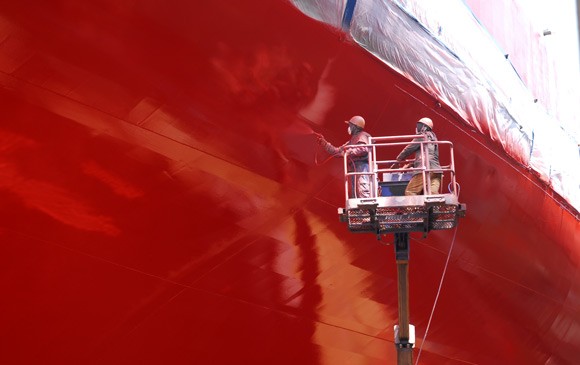