Meet the American biologist trying to discover why lightning strikes are killing so many more tall trees in the tropical rainforests.

In the middle of a lightning storm, the last place you’re supposed to stand is next to a tall tree. Unless you’re Steve Yanoviak, that is.

In 1996, while working in the tropical forests of Panama, this biologist found himself just metres away from an extremely tall tree the moment it was struck by lightning.

It was the start of a fascination with the impact of lightning on the complex dynamics of tropical forests. Research, which Yanoviak co-authored this summer with colleagues from the Smithsonian Institution and the University of Louisville (where he works as a professor of biology), concluded that, over a six-year period, “tropical terrestrial ecosystems received an average of 100.4 million lightning strikes per year”. The tallest trees were the most vulnerable while the rate of strikes were higher in areas with fewer large trees per hectare.

All of which makes lightning a veritable villain, right? Wrong. Lightning is a natural phenomenon. The real threat is actually human activity, not least deforestation and vegetation burning, and the impact this might be having on lightning frequency.

“Fundamentally it’s about climate change,” explains Yanoviak. “Models suggest that changes in atmosphere temperature are increasing the frequency of lighting, especially in tropical areas. The smoke from fires, which are mainly caused by agricultural burning, tends to create stronger storms. All that smoke getting into the atmosphere is a nucleating agent for cloud formation.”

Stronger storms, with increased lightning, does not in fact equate to more storms. It appears the opposite is the case: there are fewer storms, despite their greater strength when they occur. This creates new problems since vegetation dries out, making it more likely to burn in the face of increased lightning, thereby generating more fires and creating more smoke. 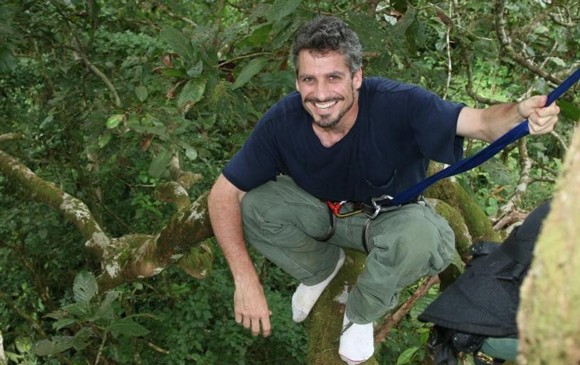 Steve Yanoviak in a tree

The impact of stronger storms and increased lightning will be dramatic. Yanoviak’s modelling shows that a projected 25 to 50 per cent increase in lightning frequency would raise the mortality rate of large trees in the forest he studied by up to 18 per cent. If you extrapolate this to all tropical forests, then the potential number of tree deaths is vast. It is calculated that, already, 832 million tropical trees are struck by lightning each year, and 194 million of them go on to die.

The challenge now for Yanoviak is to get more data. In lowland tropical forests, such as Panama’s, almost nothing burns. You might record well over 100 strikes but see no fires because vegetation is so humid and rain-soaked.

“We’ve focussed on a small patch of forest in Panama because logistically it’s easier,” Yanoviak says. “Now we want to expand our effort to include a variety of different forest types. We want to get into the Amazon.”

Should he and his colleagues get there, a lot of hard graft beckons. Air-conditioned laboratories in Panama and the increasing use of drones have made some of the work more comfortable, but scientific analysis in the tree canopy typically involves hauling heavy gear into hot, humid and slippery forests.

Yanoviak says it’s extremely physically demanding, especially with the tropical sun beating down. Sometimes he and his colleagues construct towers to raise themselves above the canopy. Other times they simply climb the trees.

“On the man-made towers, you feel vulnerable because you’re so much higher than anything around you,” he says. “But when you’re climbing on a tree, there’s always something within reach. Climbing man-made towers is more unnerving than climbing trees. I trust the trees more.”