A ship the size of 4 soccer pitches

This is the biggest container ship on the planet. Before long there will be 11 of these giants sailing the trade routes between China and Europe.

This is a behemoth by anyone’s standards. The MSC Gulsun, the world’s largest container ship, is 400 metres long and over 60 metres wide – capable of carrying 23,756 standard-sized shipping containers.

By the end of 2019 it will be joined by ten more similarly sized ships, all owned and operated by Mediterranean Shipping Company (MSC), the world’s second-largest shipping line.

It’s difficult to gauge just how gargantuan this vessel is. As MSC likes to boast, its new pride and joy is longer than the total height of the Empire State Building, with a deck the size of four soccer pitches. In a single voyage it can transport 47,500 cars, or 223 million bananas, or 2.94 million washing machines.

In August 2019 MSC Gulsun made its maiden voyage from northern China to Europe. And it’s the major Asia-to-Europe trade lanes – connecting the key ports of China with Europe via Malaysia and the Suez Canal – that will provide this ship and its sister vessels with the bulk of its work.

Container ships are measured according to a unit called TEU (twenty-foot equivalent unit), denoting how many 20-foot-long (6.1-metre) standard shipping containers (or intermodal containers, as they’re known in the trade) can be loaded aboard. Across the industry there are seven size categories of container ship, ranging from small feeder, feeder and feedermax up to Panamax, post-Panamax, new Panamax and – the biggest of all – ultra large container vessel. The latter, under which MSC Gulsun falls, covers vessels with a capacity of more than 14,500 TEU.

While MSC and its new sister ships top the list in terms of size, there are plenty of other nautical beasts of burden sailing the planet’s oceans. Hong Kong-based Orient Overseas Container Line, for example, used to hold the record with OOCL Hong Kong, at 21,413 TEU. The state-owned China Ocean Shipping (Group) Company (COSCO) is another major player, as is Marseille-based CMA CGM and Copenhagen-based Maersk Line.

But where MSC claims to be stealing a march on all its rivals is with the green credentials of its new class of ships.

“Bigger ships generally emit less carbon dioxide per container carried,” the company states. And since this vessel can accommodate a total of 23,756 containers, stacked in rows 24 containers wide, this ensures an environmental economy of scale.

Built at the Samsung Heavy Industries Geoje shipyard in South Korea, and sailing under a Panamanian flag, MSC Gulsun has a bulbous bow design which, the owners claim, saves on energy usage by substantially reducing the resistance of the hull through the water.

On the rudder, meanwhile, is a device called a rudder bulb – a bulb-shaped section which reduces the turbulence of the water behind the propeller, thereby cutting down on fuel consumption. 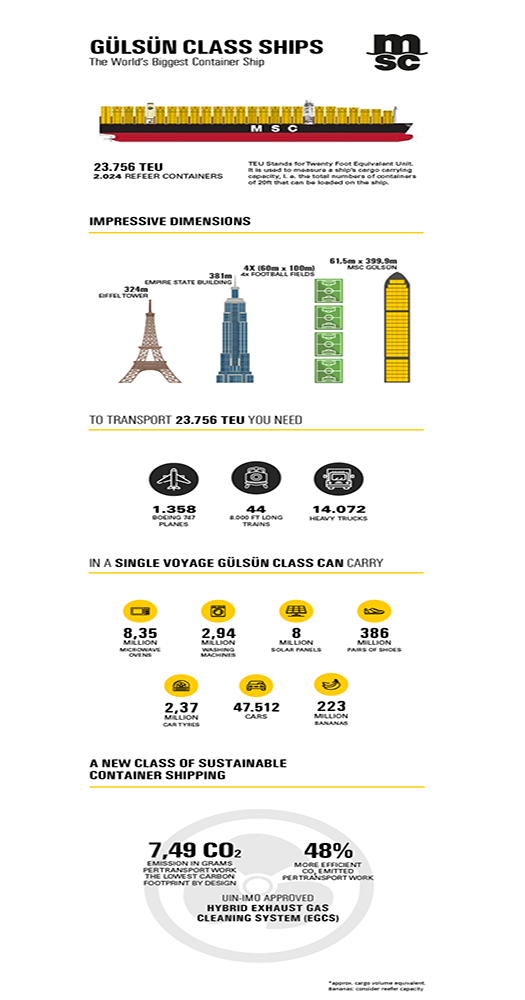 Other environmentally-friendly designs include a side profile to the ship which, MSC say, minimises wind resistance on the open seas. There’s also a hybrid exhaust gas cleaning system (or scrubber) and an engine which can switch to low-sulphur fuel or, in the future, be adapted for liquified natural gas.

Other manufacturers of container ships use similar fuel-saving designs. However, MSC claims its new ship creates just 7.49g of carbon dioxide emissions when moving one tonne of cargo a distance of one nautical mile, giving it “the lowest carbon footprint by design”.

It's a bold claim. But when you think how many tonnes of cargo MSC will soon be transporting, and how many nautical miles they'll be travelling, it's no surprise this shipping line is being so bold.