You might call it a ghost ship. When the Yara Birkeland becomes the world’s first fully autonomous container vessel (by 2022, if all goes to plan), there will not be a single human being aboard. Operated entirely by computers, this battery-powered, 80-metre ship will transport non-perishable cargo in up to 120 shipping containers along the Norwegian coast at a leisurely speed of six to seven knots.

Developed by fertilizer company Yara and technology company Kongsberg Maritime (both Norwegian), it is a trailblazer in a potential revolution in autonomous shipping. And in a time of global pandemic, it has extra appeal since it will be completely unmanned; no one aboard who might transmit the coronavirus.

The plan is that the Yara Birkeland will eventually replace 40,000 truck journeys a year on Norway’s roads. As a further boost to the country’s green credentials, the ship is electrically propelled via steerable drive pods, with the 7MWh batteries recharged through Norway’s hydro-electric network when docked. The vessel is currently undergoing manned trials along its scheduled three-port, 30-nautical mile route of challenging coastline. Unmanned operation via a shore-based control centre is expected by 2021, with full autonomy a year later.

Nonetheless, autonomous ships are still the source of some controversy. A recent poll by maritime law firm Kennedys discovered that, within global transport, confidence in unmanned vessels was as low as 18 per cent. In terms of safety, most still trust humans more than computers.

So while the coronavirus pandemic may not make human crews entirely redundant, it looks likely to reduce the size of crews substantially. This is because we should see greater autonomy within onboard computer systems, allowing smaller crews to operate larger and more complex ships more efficiently. This is already happening in specialised sectors such as tugboats, firefighting vessels and yachts. The US-based naval architect Donald L. Blount and Associates, for example, has devised a 58-metre concept superyacht where navigation, engineering and diagnostics are all highly automated for easier operation. 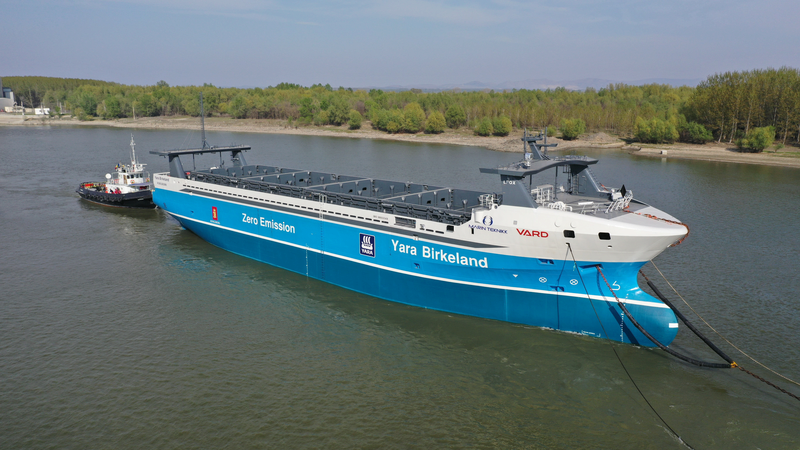 Above: The MV Yara Birkeland

The relative ease with which satellites can link to ships at sea has helped with autonomous shipping. “Perhaps the single piece of good fortune is that this pandemic took place in the internet economy,” maritime data analysts GNS report. “Connectivity and communication have never been so valuable, nor has technology proven its worth so quickly.”

At a media briefing in March, Paul Cuatrecasas, head of investment company Aquaa Partners, explained how the coronavirus crisis might increase investment in robotics and freight technology. Author of the book Go Tech, or Go Extinct, he suggests the digital disruption caused by Covid19 will see greater use of data analysis and artificial intelligence. This includes closer tracking and timing of ship movements, paving the way for autonomous shipping.

Noel Tomlinson of maritime specialists BMT concurred. “As remote monitoring and even remote control of ships increases, we are seeing a steady reduction in crewing levels and a greater reliance on automation,” he says. “This is also leading to a change in on-board responsibilities, with alternative skills being required of the crew.”

The general feeling among industry specialists is that the virus won’t necessarily advance the case for fully autonomous ships. The technology exists, but there are still many operational barriers to overcome. Instead, it will result in specialised crews and create a global digital platform where ships, ports and onward transport sectors all work together in a seamless transfer of goods.

“There will inevitably be a greater use of automation in the future,” GNS concludes. “Though seafarers have once again proven their critical value to the world economy, the means to replace them with unmanned ships remains well out of reach.”