Bamboo as a steel replacement

A radical new treatment for bamboo could see this natural product used instead of steel in the transport and construction industries.

Human beings use enormous amounts of steel. Before this year’s Covid-19 outbreak, global production was 1,869 million tonnes annually, with over six million people working in the industry, according to the World Steel Association. By 2050, global production is expected to increase by a fifth.

However, steel production comes at an enormous environmental cost. This grey metal is responsible for between seven and nine per cent of all direct emissions from fossil fuels.

Granted, there are ways in which the industry is trying to minimise the environmental impact – by pre-processing raw materials, for example, or by capturing waste gases, or by substituting coke as a raw material – but these are often more expensive than traditional methods, and require complicated changes to industrial infrastructure.

What about something as simple as natural bamboo, though? Could this abundant plant be a more sustainable alternative to steel?

A team of academics at the University of Maryland, in the United States, believes this is possible. They claim to have developed a method to strengthen and toughen bamboo so that it might be used as an alternative to steel in the construction and transport industries.

Leading the team is Dr Liangbing Hu, a materials scientist from the university’s Department of Materials Science and Engineering. There are two stages to making the enhanced bamboo. Firstly, natural bamboo is subjected to a chemical procedure called partial delignification, which modifies the molecules within the plant’s lignin, or organic polymers. This makes the cell walls of the bamboo softer and leaves its cellulose fibres exposed.

Secondly, the bamboo is heated by being exposed to microwaves. “Microwave heating drives water out of the bamboo structure,” Liangbing tells Chart magazine. “But without destroying the material’s structural integrity, even after it has undergone a large volume reduction.”

The professor and his team have tested the enhanced bamboo and claim it has nearly double the tensile strength, and over three times the toughness of natural bamboo. Liangbing suggests it might eventually replace steel in applications where weight is a crucial factor.

“We haven't tested it yet in any practical ways, but I believe it could be useful in the manufacture of cargo trucks and railroad cars, and possibly aircraft,” he says. “Bamboo is six times lighter than steel, and by saving weight, it saves fuel.” 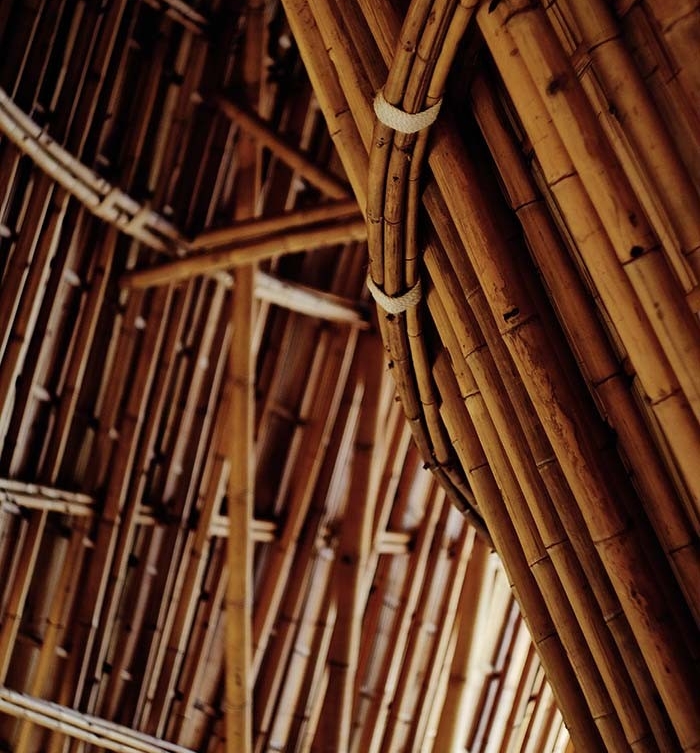 Could natural bamboo provide a more sustaimable alternative to steel?
Dr Liangbing Hu, a materials scientist at University of Maryland, is exploring the use of this plant, as a more environmentally friendly solution for the construction and transport industries.

Where bamboo really steals a march on steel, though, is in its abundance and sustainability. The plant is found across most of the planet’s tropical and temperate regions, and certain species are among the fastest-growing plants in existence – growing almost a metre in a single day.

Liangbing is no stranger to innovative building materials. He is also involved in a commercial company called Inventwood, which creates wood-based materials with special properties. One of their products insulates against heat loss; another is a wood product that is actually transparent.

But none have quite the same potential as his “super bamboo”, as he calls it. With 1,869 million tonnes of steel produced every year, even a small switch to bamboo could reduce the world’s carbon footprint enormously.