Thanks to advances in construction, engineering and digital technology, the design of superyachts is advancing at a meteoric pace. Tim Thomas, from The Superyacht Group, reveals some of the most astounding boats soon to grace the waves.

A boat is a boat is a boat, right? To some extent this holds true: the basics of naval architecture and how a body moves through the water are well established and governed by the laws of physics. But when Russian billionaire Andrey Melnichenko’s groundbreaking Motor Yacht A was launched on an unsuspecting world in 2008, it appeared those laws of physics were being ignored.

Motor Yacht A’s extraordinary Philippe Starck-designed profile and long reverse bow remain as jarring to many today, a decade on, as they did when she first appeared. If she didn’t quite herald the seismic change in general yacht design and styling that some had hoped for or predicted, A did, nevertheless, open people’s eyes to a future where conservatism could be abandoned and free thinking embraced. The result was a flood of radical concepts, many of which came from industrial designers with little experience in yachting. Hardly surprising, then, that they were often dismissed as flights of pure fantasy that could never, ever be built.

Not all quarters have been quite so reactionary. Leading the way is Dutch custom superyacht builder Feadship, which regularly challenges its team of designers at De Voogt Naval Architects to come up with extreme ideas – but on the premise that any design might be feasibly realised within five years. Bearing names such as X-Stream, Aeon and Breathe, these designs incorporate radical new thinking in all aspects, from glass exoskeletons and whale fin-mimicking rudders to sections of exterior deck that are no longer fixed but which can be automatically reconfigured, depending on the desired use. Some even make it to market. Launched in 2015, the 83.5-metre Savannah, for example, features an underwater viewing lounge and a hybrid propulsion system, both of which were developed directly from Feadship’s own Aeon and Breathe concepts. 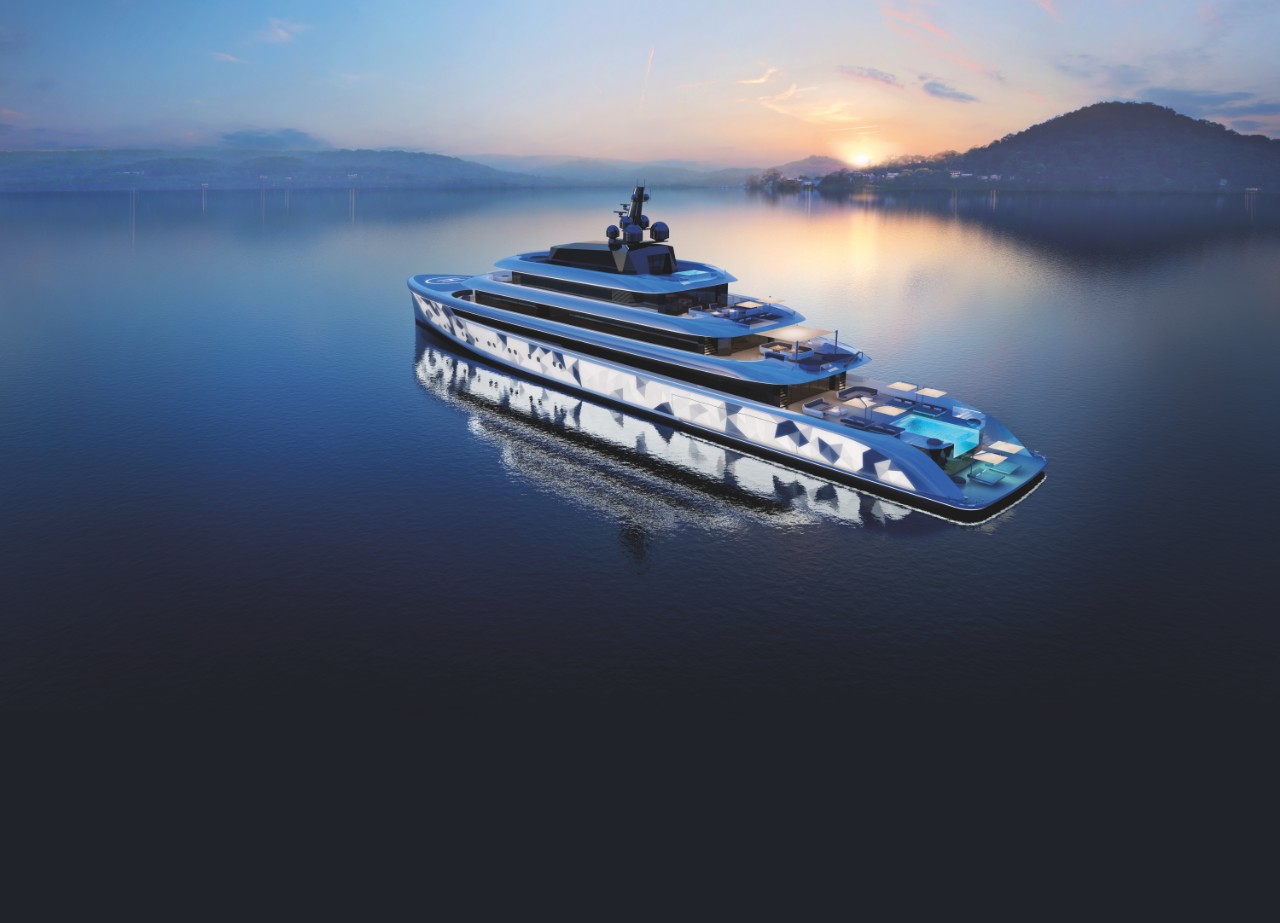 Above: The Hull of Project Moonstone is covered with lighting panels which allow it to camouflage itself.

Advances in artifical intelligence and display technologies mean that vessels you might have seen in science fiction films just a few years ago are now the stuff of reality.

It’s not just yacht styling that's getting a shake-up. Advances both in artificial intelligence and in display technologies mean that vessels you might have seen in science fiction films just a few years ago are now the stuff of reality. The dawn of autonomous shipping in the commercial sector is driving the world’s biggest shipping companies to develop advanced bridge and navigation interfaces that could change the operational heart of vessels beyond all recognition. Out will go the traditional collection of radar and navigation screens, and switch panels, to be replaced by augmented reality, giant heads-up displays, graphical overlays on floor-to-ceiling bridge windows, and even interactive holographic representations of the vessel and its systems.

Rolls-Royce and Ulstein are two industry giants that have been exploring these areas with quite stunning results. Rolls-Royce’s oX bridge concept, for example, projects data onto a floor-to-ceiling windscreen, including the ship’s speed and course, the course of other vessels, and even safe routes through ice floes. The company expects its technology to be ready for 2025. 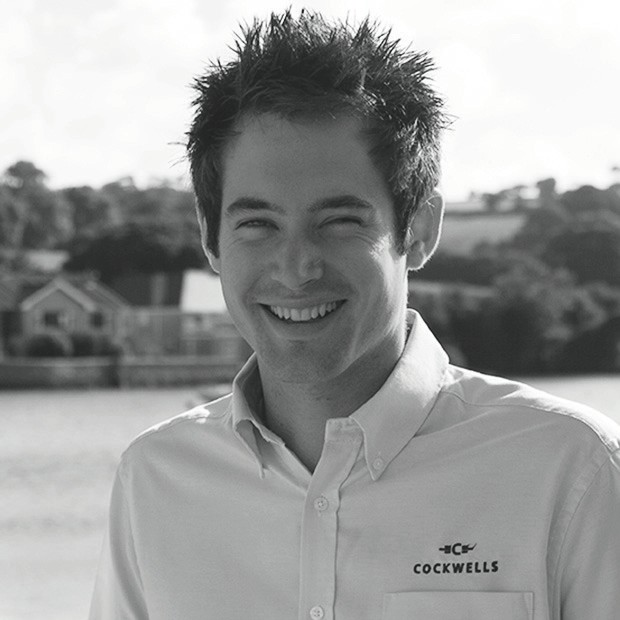 Other projects are equally eyebrow-raising. Project Moonstone is a recent concept from Dutch yacht-builder Oceanco, Dutch yacht design house Van Geest Design, and British company Temeloy Advanced Lighting Architecture. The striking 90-metre yacht features a hull covered with triangular lighting panels. Three hundred individually controlled LED lights allow the hull to camouflage itself against the sea or the sunset, mimic the night sky, or even turn the entire boat into a light show.

Another visionary is UK-based Henry Ward Design. Their yacht concept Time could well make everything that has come before feel obsolete. Among its astonishing features are an 18-metre, detachable, floating lodge that can be launched as a mini-expedition base in shallow waters; an autonomous, four-person drone housed in the bow for transporting guests, and a giant beach club aft that is revealed when the lodge is detached.

This is not just another exercise in unbuildable concept work, however. Time has been studied and engineered by renowned naval architecture firm BMT Nigel Gee to ensure it could actually be built if it piques a client’s interest.

“Time presents an insight into the future,” says Henry Ward, “It’s a 66-metre explorer yacht which expands upon current innovation and takes a fresh look at the boundaries that can be challenged as our technology and expectations expand.” 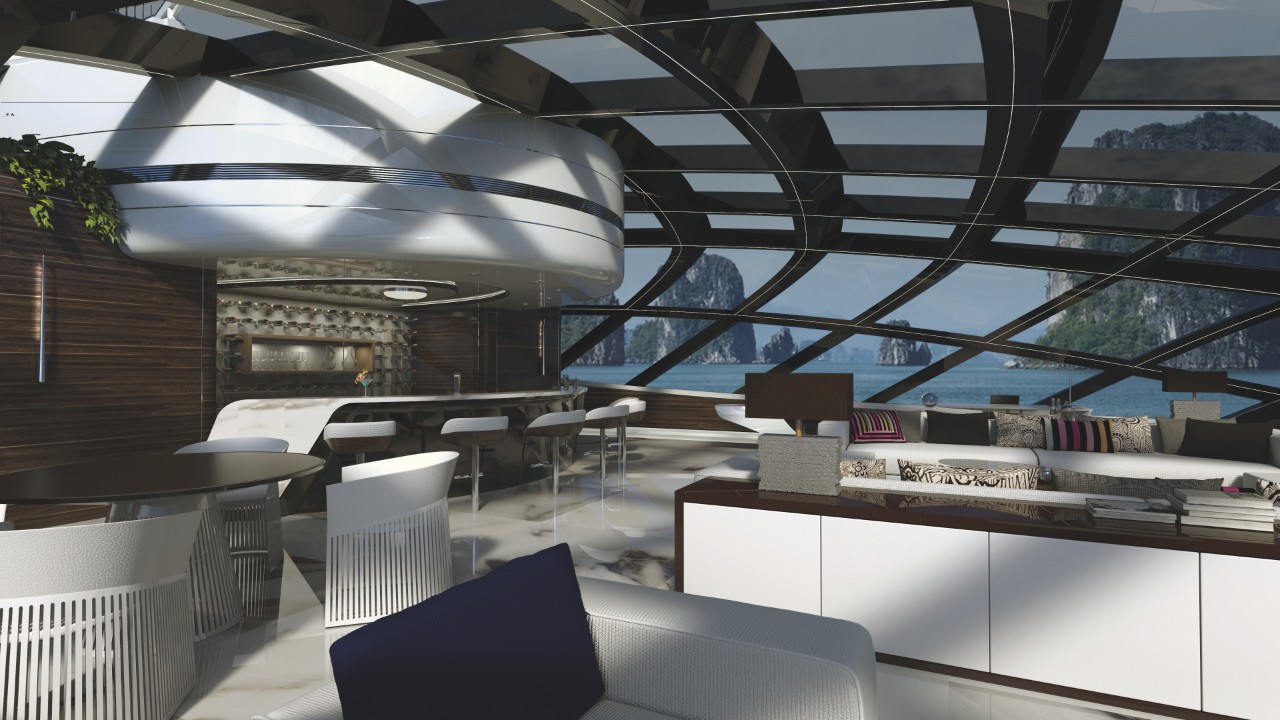 Above: Interior or the superyacht Cosmos. 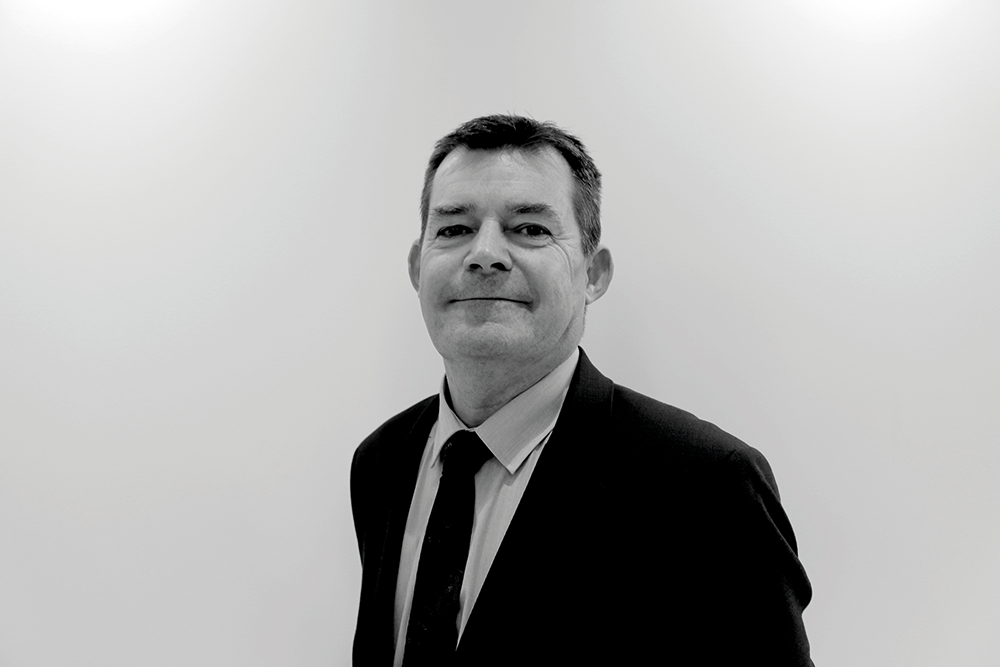 An increasingly important  consideration in motoryacht design is fuel consumption and the way we view our planet. That’s why we’re seeing shipyards producing 90-metre electricity-powered motoryachts, or even fully solar-powered yachts.

And as everyone tries to save fuel, we are beginning to see more multi-hulls coming to the luxury end of the market. There are all sorts of weird and wonderful designs appearing. French company Wind Motion, for example, has designed a 70-metre trimaran with a radical wing mast designed to pull less hull through the water.

But as the technology leaps forward, it has to prove itself before an insurance underwriter will consider taking on risk. Shipyards are constantly asking us at MS Amlin if we think their designs are insurable. They approach us because we’re experts in the field. In fact, many of us are sailors ourselves. Every weekend you’ll find the key people in our yacht product group out on the water.