Bringing down the drones

How can airports, power stations and other public buildings protect themselves from malicious attacks by flying drones?

They ran rings around London’s Gatwick Airport, making a mockery of the British authorities. In December 2018, a malicious drone operator brought the country’s second largest airport to a complete standstill for a day and a half. All it took was a small flying device with copter blades. It caused chaos, cancelling or diverting around 1,000 commercial flights, ruining Christmas travel plans for 140,000 people and, according to some reports, costing airlines £50 million. But at least no one was hurt.

Imagine, though, if the drone had collided at speed with an aeroplane windscreen, or damaged a key section of fuselage, or been sucked into a jet engine. Any one of these worst-case scenarios could have destroyed a plane at landing or take-off.

In recent years there have been dozens of near misses reported between drones and aircraft, as well as several actual collisions. Fortunately none have been fatal.

In September 2017 a drone collided with a military Black Hawk helicopter near New York City. A month later, in Canada, a drone smashed into the wing of a light aircraft as it was approaching Quebec City Jean Lesage Airport. And in April 2016 the pilot of a British Airways passenger jet claimed a drone struck the front of the plane on its approach to Heathrow Airport.

Even more worrying are incidents where terrorist groups such as ISIS and Al-Qaeda have weaponised drones for use in attacks. Or a dramatic incident in Venezuela, in August 2018, when two drones detonated explosives close to the country’s President Maduro, in what many believe was an assassination attempt.

But what can be done in the battle against malicious drones? Many national governments have attempted to introduce new laws to combat them. The British government, for example, is introducing obligatory registration for drone pilots later in 2019. 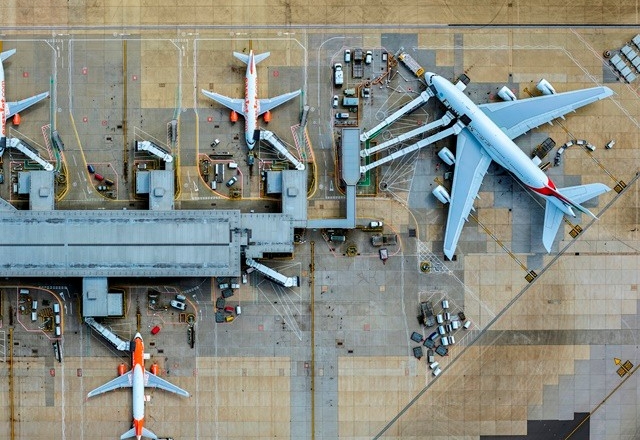 That might put off the pranksters, such as those who brought Gatwick Airport to a standstill. But to stop terrorists or criminals intent on serious damage, a far more radical approach is needed.

Weapons manufacturers have jumped on the bandwagon. Companies such as IXI Technology, Chess Dynamics, OpenWorks Engineering, Beechwood Equipment and Kirintec are all offering devices which either capture or jam drones in mid-flight.

According to the experts there are several methods for putting unmanned aerial vehicles – to use the technical term – out of action.

Since drones are classified as aircraft, simply blowing them out of the sky is rarely an option, and risks collateral damage.

Instead, one can either jam their radio signals; or use lasers to disorientate the optical cameras used by pilots to guide them; or trick their GPS receivers into thinking they are in a different location; or capture them in a net fired from a gun; or even send trained birds of prey to bring them down.

According to the company’s director, Andy Morabe, this dupes drones into their fail-safe mode, forcing them to abort their flight, and return to their point of origin or descend slowly to the ground.

Drone Killer has a range of 1,000 metres or so, he claims, but has no effect on broadband or mobile phone signals, or other radio frequencies.

That really scares security and defence organisations right now. There’s no silver bullet in the fight against drones.

Each device costs US$33,000. Morabe says they are already being used by several law enforcement agencies in the American states of Nevada, Arizona and California, to protect concerts and sporting events, and to support security forces on the USA-Mexico border.

He has also sold devices to military organisations in Thailand, Japan and India.

Some of the anti-drone weapons currently used at Gatwick Airport are manufactured by British company Chess Dynamics. Based in West Sussex, they sell a device called AUDS (Anti-UAV Defence System) which uses radar to detect drones and cameras to track them, before disabling them by jamming their radio frequencies.

The company says it was specifically developed for use by the military and has been deployed in the Middle East.

“The system may be used in remote or urban areas to prevent UAVs being used for terrorist attacks, espionage or other malicious activities against sites with critical infrastructure,” they add.

Another British manufacturer keen to bring down malicious drones is OpenWorks Engineering, based in Northumberland. They manufacturer an anti-drone gun called Skywall which, either hand-held or mounted on a vehicle or building, uses compressed air to launch a plastic capsule with a net inside it. This opens up, captures the drone, and drags it safely to the ground using a parachute.

James Cross is the company's director. He says he has sold over 50 guns so far to law enforcement agencies in Europe, Asia and North America.

The first deployment was in November 2016 when German police were asked to protect President Barack Obama on his state visit to Berlin.

The weapon was later used at a security conference in Hamburg, at the Berlin Air Show, at the Pentagon in Washington DC, and at various airports and nuclear power stations. For security reasons, Cross can't reveal whether any drones were actually captured.

Not that any of these devices on their own are completely failsafe. Airports, sports stadia, nuclear power stations and other public buildings cover enormous surface areas – and there will always be gaps in their anti-drone defences.

“To be failsafe you need a whole selection of anti-drone technology,” says Morabe who gives the example of the 2018 Winter Olympic Games in Pyeongchang, in South Korea. Here, he says, authorities used drone jamming devices but also posted marksmen with shotguns who were prepared to shoot malicious drones out of the sky.

“That really scares security and defence organisations right now,” he concludes. “There’s no silver bullet in the fight against drones.”

The exponential increase in drone usage over the last few years has had an enormous impact on the insurance industry. Estimates are that, in 2018 in the US alone, there were 1.3 million drones in operation. According to the US Federal Aviation Administration, that figure could increase to as much as seven million by 2020, especially as we see the introduction of drone deliveries and, in the distant future, perhaps even autonomous flying taxis.

Insurance policies need to cover the value of drones in case of accidents, as well as the liability of the operators. Even more dramatic is when drones come into conflict with aircraft. Here the potential risk to machinery and human life is frightening.

Our research shows that, in the UK, the number of drone incidents reported near commercial aircraft was just six in 2014, but had risen to 125 in 2018. Fortunately none caused accidents. However, malicious drone usage is now a real concern.

That’s why drone manufacturers need to ensure operators are both qualified and registered.

It’s true that some drones include geo-fencing systems, which prevent them flying near airports or sensitive facilities such as nuclear power stations. However, these systems can be over-ridden. The recent attacks on the Saudi Arabian oil refinery show the impact drones can have when being used maliciously.

I’m a member of the International Union of Aerospace Insurers and I sit on the Airline Study Group. Recently the union has been working closely with the Civil Aviation Authority, discussing, amongst other topics, how to respond to drone threat. Plans are still in the early stages but many stakeholders are involved, ensuring we stay alert to all the issues involved.