Delivering cargo anywhere on the planet

This unmanned cargo aircraft, with vertical take-off and landing, can deliver to any region, any terrain. Could it replace cargo helicopters?

Jungles of the Congo, remote Indonesian islands, the snowy wilderness of Alaska, offshore oil rigs, desert regions, polar regions, even chaotic war zones… the new Rhaegal B aircraft, with its vertical take-off and landing capabilities, is designed to deliver heavy cargo to all of these places. And since it’s unmanned (there’s not even a cockpit), it’s technically a drone.

You rarely see drones this large. Fourteen and a half metres long, with a wingspan of 17 metres, the Rhaegal B can accommodate 2,450kgs of cargo when taking off and landing vertically, or 4,550kgs when using a runway like a conventional aeroplane. It has a range of 1,100 miles (1,800kms) and a maximum cruise speed of 230mph (370kph). Could it end up replacing cargo helicopters?

Sabrewing, the California-based manufacturer, already has “firm orders” for 65 Rhaegal Bs. Headquartered in Camarillo, in southern California, the company will begin manufacturing its new aircraft in Anchorage, Alaska, near many of its major customers in the oil and gas industry.

Ed De Reyes is the CEO. He explained to Chart Magazine just how versatile and efficient his new aircraft is. The wings can be folded when it needs to set down in tight spaces. The undercarriage features four sets of wheels with high flotation tyres, allowing it to land on uneven or soft surfaces such as snow, sand or marshland. Cargo is rolled on and off through the hinged nose of the plane, without the need for forklift trucks or pallet jacks, and then stowed aboard either in nets or in standard airline containers, known as unit load devices, or ULDs.

Propulsion is a combination of jet fuel and electric fans. In the rear of the plane, twin engines – fuelled by jet fuel – power generators to produce electric power to drive fans in each of the four corners of the craft. These fans provide lift during take-off and landing but, once the aircraft is airborne, the wings and the fuselage provide the majority of the lift needed.

“The shape of the aircraft is so aerodynamically efficient that, once it’s in the air, we can turn off one of the turbines completely and throttle back the other,” De Reyes explains. “The Rhaegal B uses very little fuel.” He claims that for every 25kgs of lift the aircraft achieves, there is only 1kg of drag.

So where will this cargo drone eventually be used? De Reyes has sold to clients in Alaska’s oil and gas industry, especially in the remote far north of the state, in a region called Alaska North Slope, which borders the Arctic Ocean. Other buyers include overnight couriers, a medical supplier, and a company which delivers food packages to remote areas for the World Food Organisation. One client is even thinking of adapting the aircraft for the fire-fighting industry, so that it can transport water and drop it from the air onto wildfires. 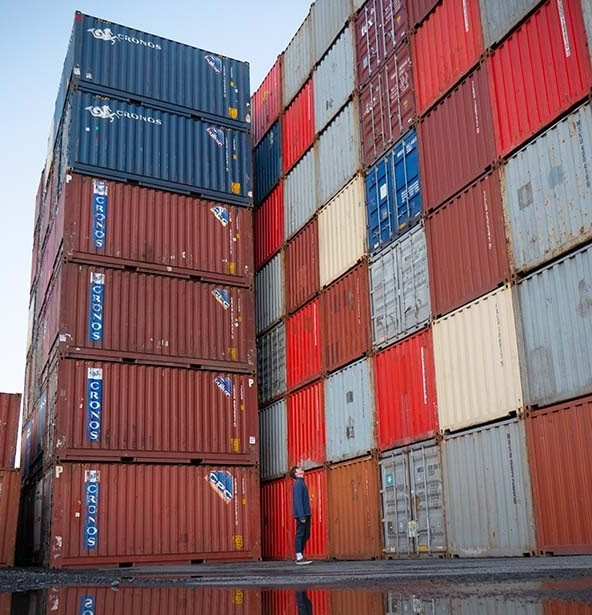 One area from which Sabrewing might really profit is the military. Already, the company has a US$3.25 million contract with the US Air Force. De Reyes claims the Rhaegal B is “more economical to purchase, operate and maintain” than a cargo helicopter such as a Chinook. Plus, of course, since it’s pilot-less, there’s no risk to human life in a war zone. He says his aircraft could even be used for medical evacuation of military personnel in times of war. Although it’s not designed to have crew aboard, it is possible for medics to ride in the cargo hold, and help whisk injured soldiers from the battlefield.

The Rhaegal B is still in development stage – a process that was inevitably hampered somewhat by Covid-19. However, De Reyes is confident the first production models will be ready early in 2021.