In Paris, in early 2018, the auction of a fossilised Allosaurus skeleton for US$2.3 million brought to the boil a debate that has long simmered between scientists, private collectors and bone hunters. The excellent specimen, dug out of the ground in Wyoming, USA, in 2013 by professionals, was entirely legitimate. No rules were broken. The buyer even promised the skeleton would be shared with the public, rather than hidden away for private enjoyment.

Yet the paleontologists were incandescent. This sharp-toothed carnivore from the late Jurassic period, which had lived and died around 150 million years ago, was thought to have different characteristics from Allosaurus already discovered. Could it be a new species altogether? Did its bones harbour secrets  that would shed new light on the world in which it lived? If the skeleton ended up in a shopping mall  or a millionaire’s living room, all this information  could be lost to science forever.

For the Society of Vertebrate Paleontology (SVP), based in Maryland, USA, this was a travesty. Its members sent an open letter to the auction house, pleading for the sale to be cancelled. “Scientifically important vertebrate fossils are part of our collective natural heritage and deserve to be held in public trust,” they wrote. “Scientific practice demands that conclusions drawn from the fossils should be verifiable: scientists must be able to  re-examine, re-measure, and re-interpret them.  Such re-examination can happen decades or  even centuries after their discovery.”

If dinosaur remains are meant for anything, it's for humanity's collective understanding of the history of our planet.

Enough was enough, they warned. The Parisian Allosaurus was the latest in a growing trend of extravagant sales. In the previous two years, a fossilised Diplodocus skeleton and a Triceratops skull had attracted exclusive buyers. Two more Allosaurus had broken the million-euro barrier. In 2015, when Hollywood actor Nicolas Cage outbid fellow A-lister Leonardo DiCaprio for the skull of a Tarbosaurus bataar (a close relative of the T-Rex), he was forced to hand it over to authorities. The fossil had been illegally removed from Mongolia, and their government wanted it back. Stories of black-market dealing, forgeries, composite skeletons and even invented species abound in the fossil underworld.

All of this undermines science, says Professor David Polly, president of the SVP, and lead signatory of the open letter. He admits the commercial collection of dinosaur skeletons is not a new phenomenon, but he is now more concerned than ever, as the number of examples and the amounts of money are escalating on the open market.

“Let’s be clear, I have no problem with skeletons that pass into the public trust,” he says. “It’s the trading that takes them into people’s living rooms or private collections that upsets me. Eventually those people pass them on, and the data on those fossils is then unknown.”

As someone who has dedicated his academic career to the subject, Polly can see the attraction of the fossilised remains of ancient reptiles. “They are an evocative part of the history of the Earth,” he concedes. However, he believes mankind might live to regret choosing sensationalism over science.

“The general consensus is that we’re heading towards a five-degree centigrade global temperature change. The last time there was a five-degree swing was the Ice Age. The demise of the dinosaurs was also largely a climatic phenomenon. What can we expect from climate change over the next century or millennia? What will matter or what will prove irrelevant? Paleontology can help give us clues. Fossils tell us how life on earth has responded to major changes in climate, volcanism or asteroid impacts.”

There are grey areas in this debate, however. There’s another side to the coin. For the commercial fossil teams who are prepared to sink serious sums of time, money and labour into finding hidden treasure, these lost dinosaurs are fair game. Through the decades, science has gained immensely from dedicated bounty hunters, many of whom have a deep paleontological knowledge of their own. Sure, there are plenty of crooks, but there are also several Indiana Joneses and Lara Crofts, hell-bent on doing the right thing. In the past, the great museums of the age were able to offer the biggest purses. Now that corporations and individual billionaires have more financial clout (and provided the hunters aren’t breaking any laws), then surely the scientists just have to grin and bear it? After all, without the commercial teams digging, the fossils might never see the light of day in the first place.

Polly can see why landowners are drawn to the wallets of the private collectors, rather than the satisfaction of providing a specimen for academia. However, he believes there’s a third way. He takes comfort from his university’s relationship with the Black Hills Institute of Geological Research in South Dakota, USA, which constructs high-quality casts of the skeletons, and then places the real fossils into a repository where they can be studied.

Every new auction sale fills Polly with a deep sense of disappointment. “The more money that these skeletons fetch, the more it worries me that thieves will be incentivised to target collections like my own university where I’m the curator. Bandits might also be tempted to collect fossils illegally from federal land in the US, and then falsify where the specimen came from. That misinformation damages science.”

The comparison with artworks is, in his view, dangerous. He sees a clear distinction of what is a good thing to auction, and what is not. “Salesrooms are creating an unhealthy focus on prize specimens,” he said. “The site the Allosaurus came from almost certainly had other fossils in it that weren’t as spectacular. Scientists could have found contextual information in the rocks and all sorts of information that would tell us a lot, not only about that particular animal, but about the world that it lived in. All that is lost if the pristine specimen is viewed solely as the prize.”

The effect of movie blockbusters such as the Jurassic Park franchise adds to the allure of the big names – with the T-Rex top of the pile – just as a collector might covet masters such as Van Gogh or Leonardo da Vinci. “I think it happens,” said Polly. “The problem is that we currently don’t have enough T-Rex skeletons to document what that species was really like. Besides, dinosaurs were living creatures. They weren’t meant to be collected. If their remains are meant for anything, it’s for humanity’s collective understanding of the history of our planet. By contrast, an artistic masterpiece was born from human talent. It was meant to be admired, bought and sold. Saving a skeleton for science is not the same thing as getting a Rembrandt painting into the public trust. To science, and I believe mankind, a dinosaur is genuinely priceless.” 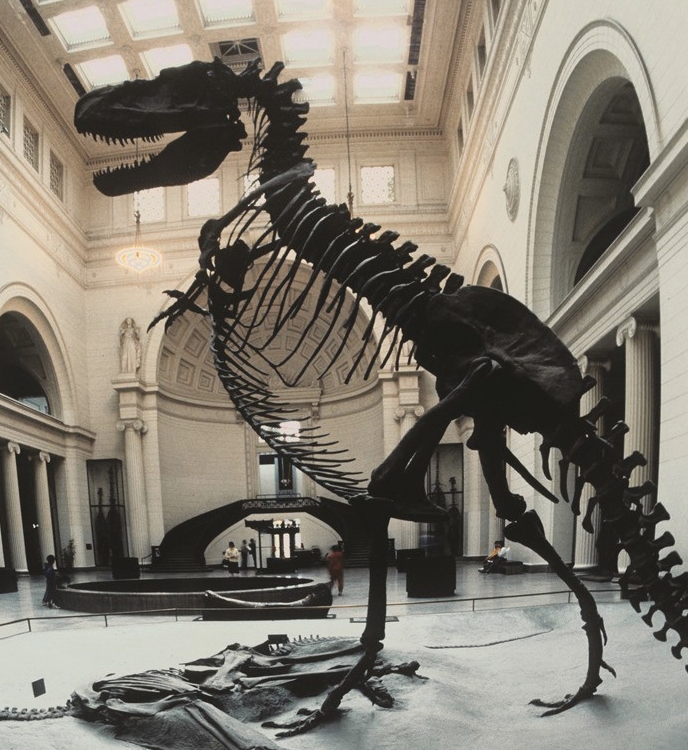 In August 1990, American fossil collector Sue Hendrickson stumbled upon the largest and most complete Tyrannosaurus Rex skeleton ever found (below). The fossil, nicknamed Sue, after its discoverer, had been lying for 67 million years in land on the Cheyenne Indian River Reservation, in South Dakota, USA. Alive, it had been 12.3 metres long and 3.7 metres high at the hip. After lengthy ownership disputes Sue was eventually sold at auction for US$8.3 million, making it the most expensive dinosaur in history. Sue now lives at the Field Museum of Natural History in Chicago, and even has her own Twitter account (@SUEtheTrex) with over 40,000 followers. 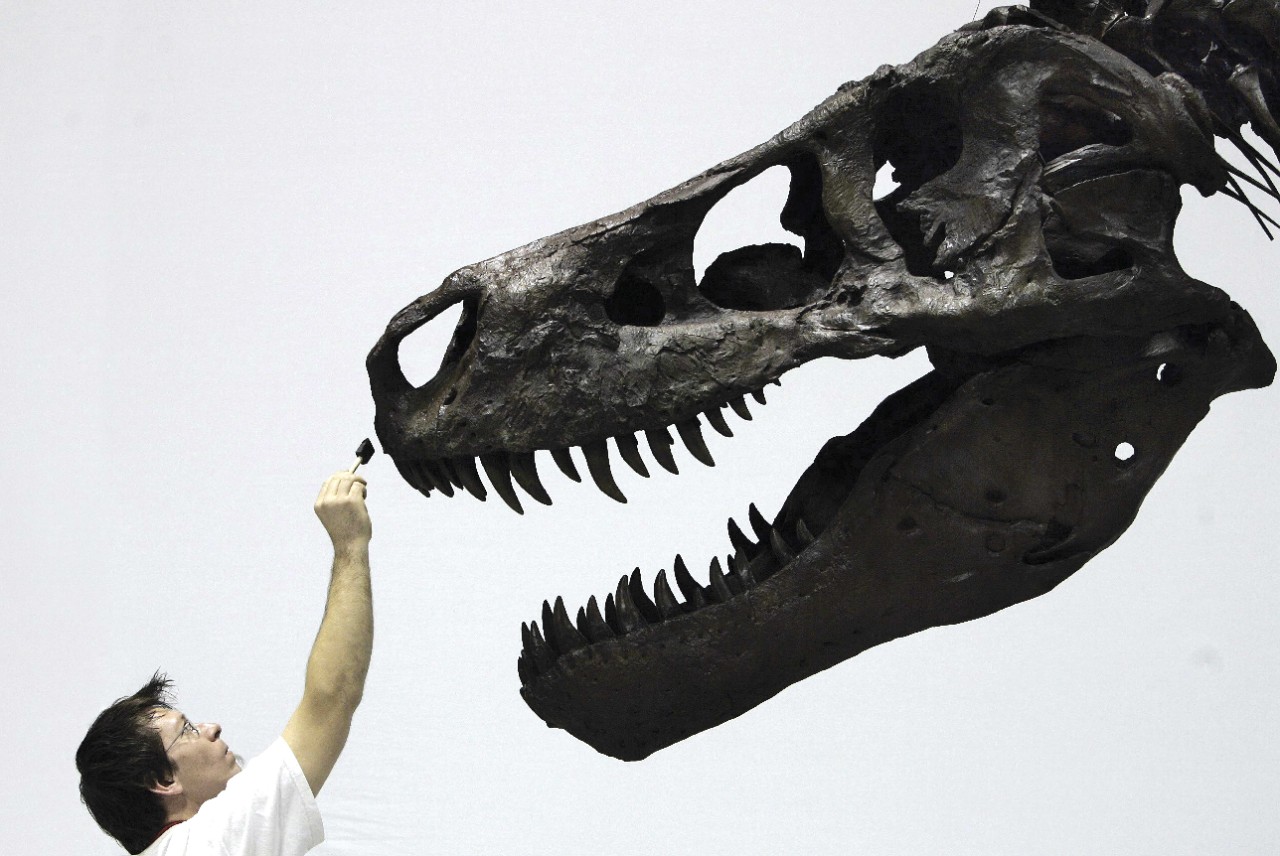