This is where old aeroplanes go to die. These aircraft junkyards in the Californian desert are the subject of a new book by Californian photographer Troy Paiva.

There are thousands of old aeroplanes parked in the deserts of the American Southwest. After years of service in the military or for commercial airlines, they have been unceremoniously dumped in junkyards and left to die. It’s an ignoble end for these beautiful flying machines.

But there is one man trying to give them dignity in their afterlives. Troy Paiva is a San Francisco-based photographer who specialises in shooting old vehicles, buildings and machinery. His latest book, Boneyard: SoCal’s Aircraft Graveyards at Night, brings together his intriguing photos from the aircraft junkyards of Southern California.

“The whole idea is to show the fallibility and finite nature of all these machines we make,” Troy explains. “The more we take them for granted, the more interesting they are. I’m fascinated by technology and machines in general: decommissioned military bases, junkyards of every description, bypassed and abandoned roadside towns, derelict amusement parks, industrial infrastructure, hospitals, hotels, ocean liners… But aeroplanes are one of my favourites. I’m a geek for this stuff.”

Troy is slightly unorthodox in that he photographs only at night-time, illuminating his subjects with the full moon or hand-held strobes and electric torches. It imbues his images with a surreal, almost ghostly quality.

In this latest book, his models include a whole smorgasbord of aircraft languishing in junkyards in the Mojave Desert. 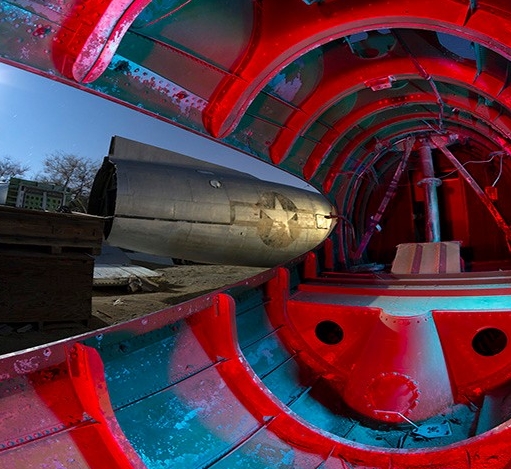 Most have been cannibalised of all their reusable parts, as if their bones have been picked by vultures. Others look closer to their original working state but have still deteriorated in the desert climate. All are ghosts of their former selves, brought back to life through this arresting photography. “Angels of the Mojave,” Troy calls them.

This goes beyond simple plane-spotting and into the realm of contemplating mankind’s place in the universe. 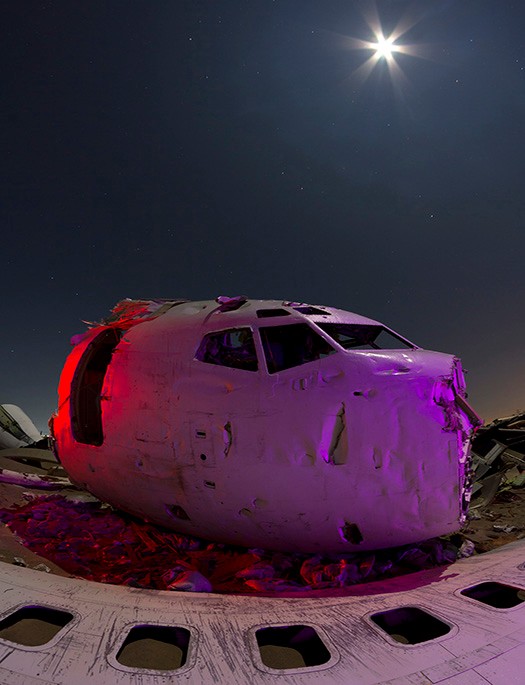 For the last 30 years or so, this self-confessed plane geek has searched out these aircraft graveyards, sometimes sneaking in at night, other times charming the security guards to allow him access.

Some of the aeroplanes, he explains, are surplus to an airline’s requirements and are parked here before being vacuum-sealed in protective plastic, waiting for the day they once again fly. Most, however, have reached the end of their working lives, and serve purely to be stripped for spare parts. While the desert heat wreaks havoc with the paint and the plastic, the dry air ensures the metal is preserved for decades.

“My favourite is when they park an old derelict plane and it sits there for 20 years before anyone decides what to do with it,” Troy adds.

Taking photos at night in the desert can be a harsh working environment. The heat in summer, the cold in winter, the wind, the sand blasting his camera equipment, and mangled metal catching at his clothes.

“I’ve had uncountable number of twisted ankles, scraped shins, gouged up legs from hiking through tumbleweeds with short pants on. I’ve been bitten by all kinds of spiders and mystery insects; tarantulas and black widows crawling up and down my legs. There’s a bit of the Indiana Jones going on here.”

Once, while he was photographing an old, abandoned building, a rattlesnake leapt out at him. “He slithered out from under some steps and I managed to jump over him just as he was lunging at me.”

In July Troy had a serious fall while shooting at a car junkyard in the Mojave Desert. He tripped and, trying to protect his lighting equipment, landed on his right shoulder on some steel girders, tearing the muscles in the process. Following surgery, he is now laid up at home waiting to heal. Doctors have told him he won't be able to work for several months.

It’s all worth the discomfort, though. In his book, his descriptions of photographing in the night-time desert sound like scenes from a David Lynch film.

“At night, it’s another world, a different state of being. After dark, the Joshua trees seem to come alive, as their twisted limbs wave in welcome, beckoning you into their weird embrace.

“A few hours after dark, things really quiet down. You can’t walk 25 feet without making a jackrabbit sprint from the shadows, just a flicker out of the corner of your eye. Feral creatures rustle through the debris fields. The enormous beehive hanging out of a decapitated 737 flight deck softly hums itself to sleep in the cooling air. 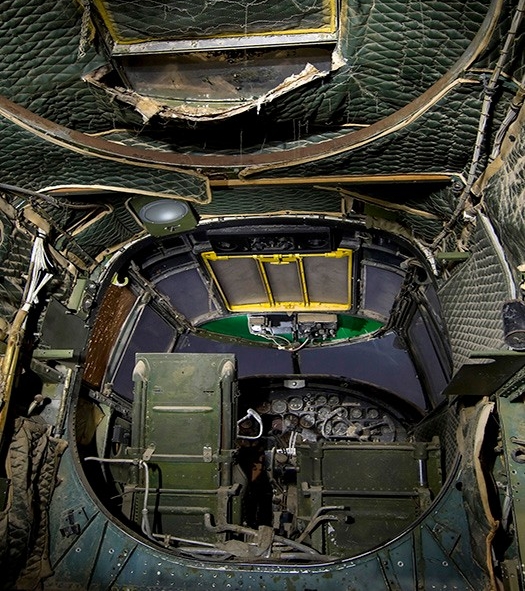 “Heavy monsoon clouds roll in as the evening progresses. The smells of hydraulic fluid and sage, of benzene and a hint of rain, waft in the breeze. The thunderheads flow into some amazing formations. Hours pass like minutes.” 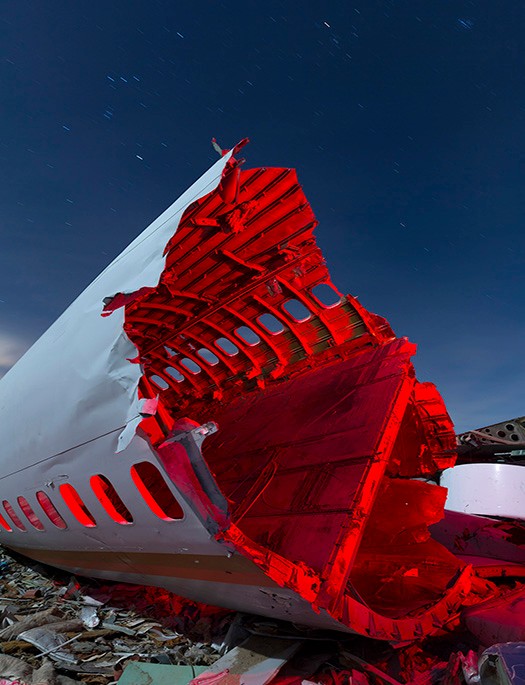 The aircraft he photographs may look forlorn and unloved but Troy is proud to be breathing new life into them. He says it’s all part of man’s natural appreciation of history and heritage.

“We humans love historical ruins. We are fascinated at looking at our mortality – whether it’s an old castle, or Machu Picchu, or the Egyptian pyramids, or Angkor Wat, or Pompeii.”

The intrigue of these world heritage sites is no different to the attraction he has for old aircraft, he says. “It’s the same feeing. I’m just doing it with modern ruins which people haven’t considered yet.”

As he sums up in his book: “This goes beyond simple plane-spotting and into the realm of contemplating mankind’s place in the universe.”