Holding back the hurricanes

Atlantic hurricanes can cause death and destruction even as far north as New York City where engineers are about to embark on a huge coastal defence project designed to save lives and property.

Hurricane Sandy took no prisoners when she battered New York City’s Staten Island back in 2012. The low-lying borough was no match for the waves that lashed in from New York Harbor, some of them as high as ten metres (32 feet).

By the time she had run out of steam, in Staten Island alone, there were 24 dead; and dozens more along the rest of the Eastern Seaboard. According to the National Hurricane Center, Sandy was the fourth costliest hurricane in US history, eventually causing US$65 billion worth of damage. $1billion of that was just in Staten Island.

These types of storms arrive with alarming regularity. Indeed, there was major death and destruction back in the early 1990s with the December 1992 nor’easter, for example, and a brutal March storm the following year.

Locals know it’s only a matter of time before another violent hurricane sweeps in off the Atlantic. Which explains why New York City authorities are now preparing to build a $615 million sea defence along the east coast of Staten Island.

Frank Verga, from the US Army Corps of Engineers, is leading the project. He explained to Chart how a combination of buried sea walls, flood walls, levees, landscaping, ponds and tidal wetlands would be built along a five-mile stretch of coast from Fort Wadsworth in the north of the island to Oakwood Beach in the south.

It will act as the first line of defence against severe coastal storm surge flooding and wave forces.

“It will act as the first line of defence against severe coastal storm surge flooding and wave forces,” he added.

The resulting walls – built of steel piles, armour stone, bedding stone and reinforced concrete – would eventually rise 0.6 metres (two feet) above the highest level that Hurricane Sandy reached in 2012. And, reassuringly for Staten Island residents, that’s high enough to defend against the most extreme flooding events ever recorded in this part of the United States, with a bit of leeway built in to compensate for a rise in ocean levels over the next few generations. Verga says construction is expected to start in the summer of 2020 and finish four years after that.

He and his colleagues have more than a little experience in major engineering works. First established in the early 1800s, the US Army Corps of Engineers has been constructing coastal fortifications, roads, canals, buildings and monuments ever since. 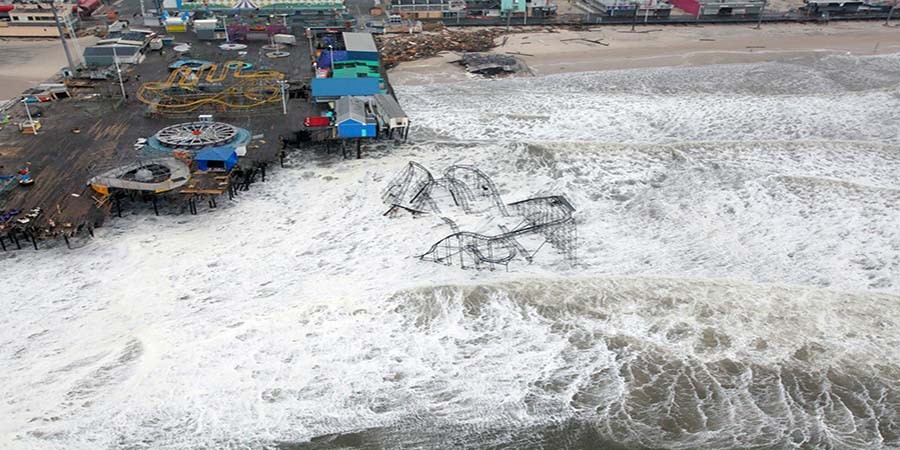 While many heavy-duty coastal defences can be brutalist and ugly in their architectural style, it’s hoped this Staten Island wall will be somewhat easier on the eye. The computer-generated images released by the New York City Mayor’s Office resemble a beach boardwalk rather than an industrial sea defence. A public walkway will run along the top of the flood wall, giving residents leisure use as well as protection against the elements. City authorities say the walkway will be large enough to host concerts, carnivals, marathons and other cultural events.

Let’s just hope they give it a snappier name than its current one. Right now they're calling it the South Shore of Staten Island, NY Hurricane and Storm Damage Reduction Project. Try saying that when the wind and waves are whipping in off the Atlantic Ocean.