The astounding images we see on marine nature documentaries such as the BBC’s Blue Planet II come to us courtesy of some of the most innovative cameramen in the business. Skilled divers like Malaysia-based Roger Munns.

It’s not the sharks he’s so worried about. Nor the jellyfish. Not even the stingrays. For underwater cameraman Roger Munns, the greatest risk of all is himself.

“There have been myriad moments when I’ve come close to doing myself a very nasty injury or worse,” says this 43-year-old who worked on the latest BBC nature series Blue Planet II. “It’s almost always my fault.”

Once, while filming off the Sri Lankan coast, Munns saw the fin on one foot sliced clean off by the propeller of an outboard motor. “It narrowly missed cutting my toes off by a matter of millimetres,” he remembers with a shudder.

The marine animals are often unfriendly, too. While filming last year’s Blue Planet II, for which he captured ten of the many amazing sequences, Munns was stung by a stonefish, one of the most venomous creatures in the sea. The culprit had buried itself beneath the sand, and he inadvertently placed his hand on its dorsal fin, causing it to inject him with venom. “That was absolute, torturous agony,” he says. “I’ve worn gloves under water  ever since.” 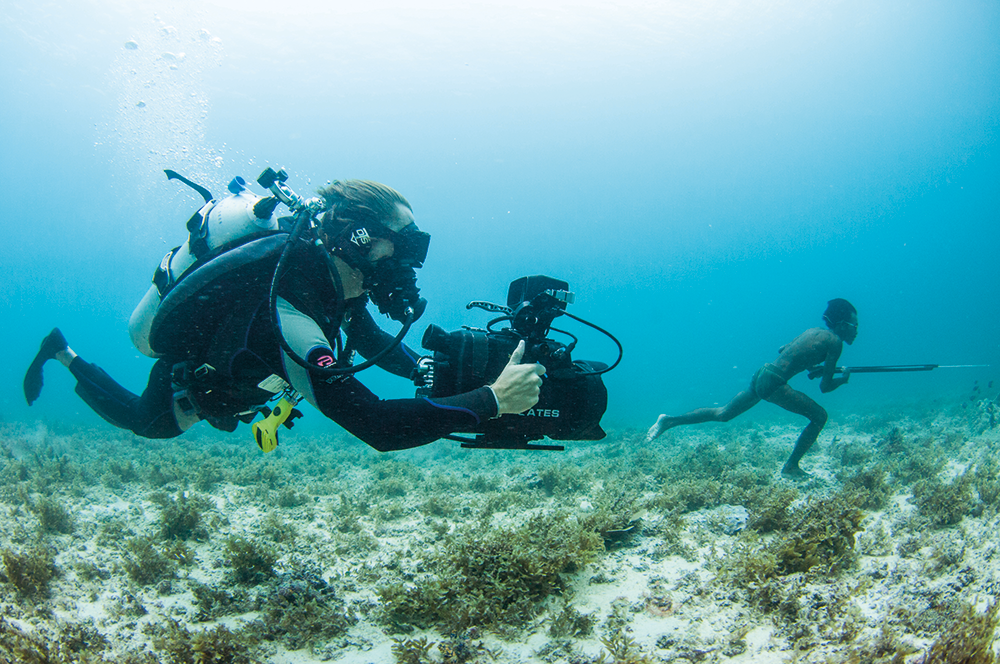 Above: Filming a spearfisherman walking on the sea bed near Mabul Island, Malaysia. Photo by Christian Loader / scubazoo.com

Most of the time, though, Munns keeps the wildlife at a safe distance, with his camera between him and his subjects. He has witnessed some sublime submarine moments during his working life. One which stands out was in 2008, off Tonga, in Polynesia, during a shoot for another BBC series called Life.

“I had a lovely two-hour encounter with a young humpback whale calf. It was incredibly inquisitive and friendly. It would come and nudge me, and spin around in front of me, doing loop-the-loops. It was like playing with a two-tonne puppy dog – an experience I’ll never forget.”

Film shoots such as this, in the open ocean, can be challenging, both physically and mentally. One of Munns’ jobs on Blue Planet II, which the producers called “the boiling sea phenomenon”, involved filming a mass feeding event in the Pacific Ocean. “Anecdotal evidence suggested the ocean would come alive in a writhing, tumultuous mass of lantern fish,” Munns explains. “Apparently it would be so violent that, from the surface or the air above, it would seem as if the sea was boiling.”

I had a lovely two-hour encounter with a young humpback whale calf. It was incredibly inquisitive and friendly. It would come and nudge me, and spin around in front of me, doing loop-the-loops. It was like playing with a two-tonne puppy dog – an experience I’ll never forget.

BBC cameramen had already failed once in their attempt to capture the event, a year and a half before, so when Munns and his team set out from the coast of Costa Rica on a three-week mission in a small fishing boat, all fingers were crossed. One thing was certain, though: there would be a lot of hanging around.

“The cruelty of open-ocean filming is the boredom,” Munns explains. “It takes a certain kind of patience and mental strength to stay rational, calm, positive and ready for action when you see nothing but sky and sea for weeks on end. That’s what happened to us. We spent almost three weeks bobbing around in the sweltering heat of the big blue. Finally, at dawn on the penultimate day, we found our bait ball. The whole feeding event lasted less than 30 minutes, but we got the shots we needed of the dolphins, mobula rays, tuna and sailfish feeding on masses of lantern fish.”

Munns’ job requires considerable fitness in the water. He is a qualified diver (obviously), with over 5,000 dives completed, but also a strong surfer, free-diver and open-water swimmer. “I’m always learning, though,” he says. “I never fall into the trap of being blasé or over-confident. The ocean is fickle and immensely powerful.”

One constant headache is travelling with all the film equipment. Born and brought up in the UK (“on the rugged coast of North Cornwall, where I got my love of the ocean”), Munns now lives with his wife and two children in the Malaysian city of Kota Kinabalu, from where he flies to various maritime destinations around the world.

“I’m often checking in at airports with several hundred kilos of gear,” he explains. “Negotiating check-in, customs and security with cases full of sensitive camera equipment and batteries is not in any way fun. Multiple short-haul flights, taxis and boat transfers mean constantly loading and unloading gear, making sure nothing goes missing.”

But, once on location, it’s always worth the effort. The huge exposure of the TV series Munns works on enables him to project an invaluable environmental message to viewers worldwide. Blue Planet II, for example, which was narrated by David Attenborough, has been seen in more than 30 countries.

Munns is proud of the innovation of the documentaries he and his colleagues produce. “We are usually pushing the envelope in terms of equipment, scientific knowledge, animal behaviour and cinematography,” he says. “Often I’m filming something which has never been filmed before. I’m not just trying to capture it on camera; I’m trying to make the shots worthy of David Attenborough’s voice.” 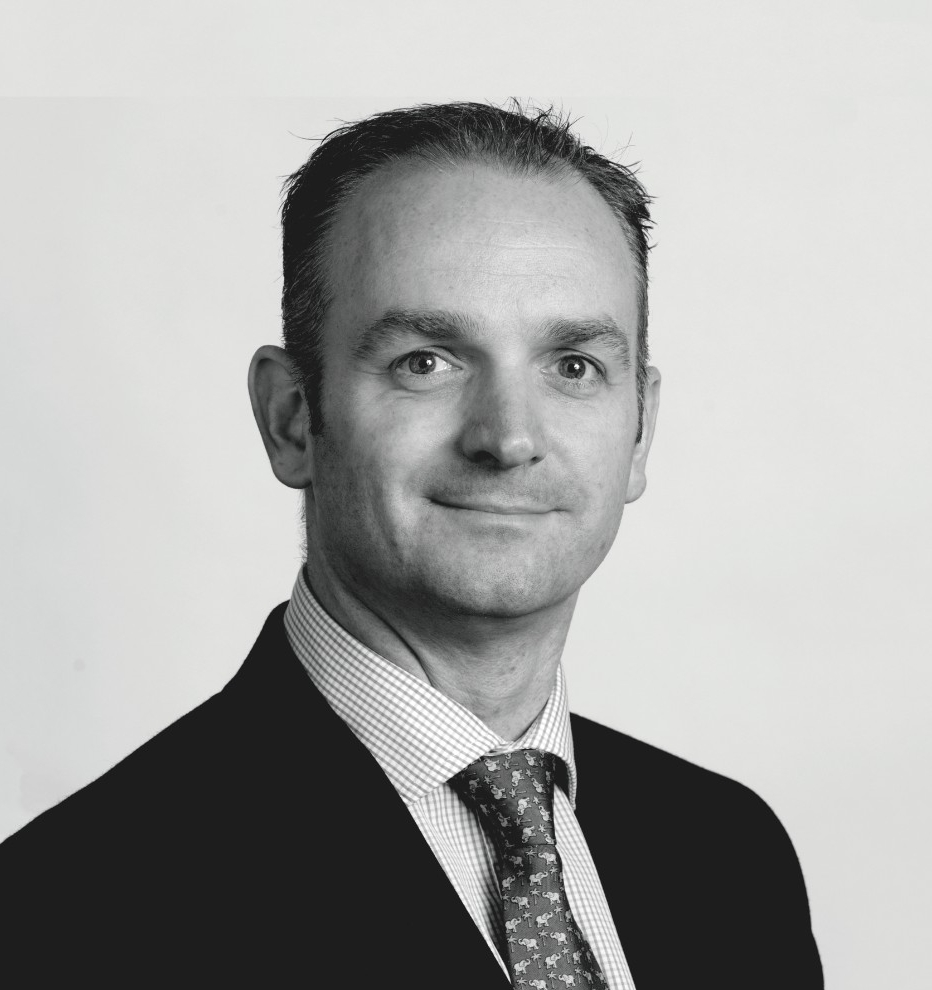 Many of us saw remotely operated vehicles (ROVs) being used in the recent BBC series Blue Planet II, but these vehicles date back to the 1960s when they were first developed for US Navy search-and-rescue operations. They  leapt into the commercial world  in the 1980s, playing a key role in the offshore oil and gas industry.

In 1995, the Kaiko, which was partly constructed by Mitsui Engineering (part of MS Amlin’s parent company MS&AD) was the first ROV to reach a point in the Mariana Trench known as Challenger Deep – the deepest known place on the ocean bed, at 10,900m. (Mount Everest, by contrast, is 8,848m high.) That  dive was the deepest ever made  by an unmanned craft.

With less than five per cent of the ocean bed explored so far, ROVs will continue to play a key role in the commercial and environmental worlds. MS Amlin will continue to be a partner in that ongoing adventure.