Living in a bathtub

So says Dirk van Peijpe of life in the Dutch city of Rotterdam. Founder of landscape architecture firm De Urbanisten, he explains how his low-lying city is constantly under threat of flooding. In January 2018, for the very first time, all five of the Netherlands’ main storm surge barriers had to be closed at once due to strong winds and high seas.

Even in a city where 80 per cent of the land   sits below sea level, this is unusual.

De Urbanisten has just launched a two-year research and design project entitled The City as a Sponge. It comprises a circular garden where the city’s three main soil types are being investigated for their sponge-like qualities. “It will be interesting to see how vegetation and other biological materials can also be used to increase the ability of the city to perform as a sponge,” says van Peijpe. “Can the city soak up water, store water and then give it back to its environment in the same way a sponge naturally does?”

De Urbanisten has been involved in many of the more intriguing water management projects around Rotterdam, Europe’s largest port. It is also the firm behind the first, largest and most famous water square in the city (some say the world), which opened in 2013. Called Benthemplein, it eloquently showed how functionality could work alongside aesthetics. The square, which is planted with trees, long grasses and wildflowers, has a sunken sports pitch in the centre with stepped seating on both sides, and two basins nearby that can be used for biking and skateboarding in dry weather. Following a sudden rainstorm, the pitch and basins turn into water receptacles that can hold an impressive 1.7 million litres of water.

In order to emphasise the square’s purpose, the designers created oversized stainless steel gutters, bringing water from nearby surfaces and rooftops into the collection ponds. “We also have a water wall in the largest basin that releases the water in an orchestrated way, and a rain well that brings water into the square in an almost mystical way from below,” van Peijpe adds.

Arnoud Molenaar has the rather interesting job title of chief resilience officer for Rotterdam. “This is about climate resilience yes, but it’s also about adding urban quality and investing in social cohesion,” he says of Benthemplein water square which used money earmarked for sewage works and pumps to improve public space. “Our new philosophy is to do things in a multi-functional way and not look at climate change only as a problem. Every city wants to become a more attractive and greener city. We can combine all these ambitions.” 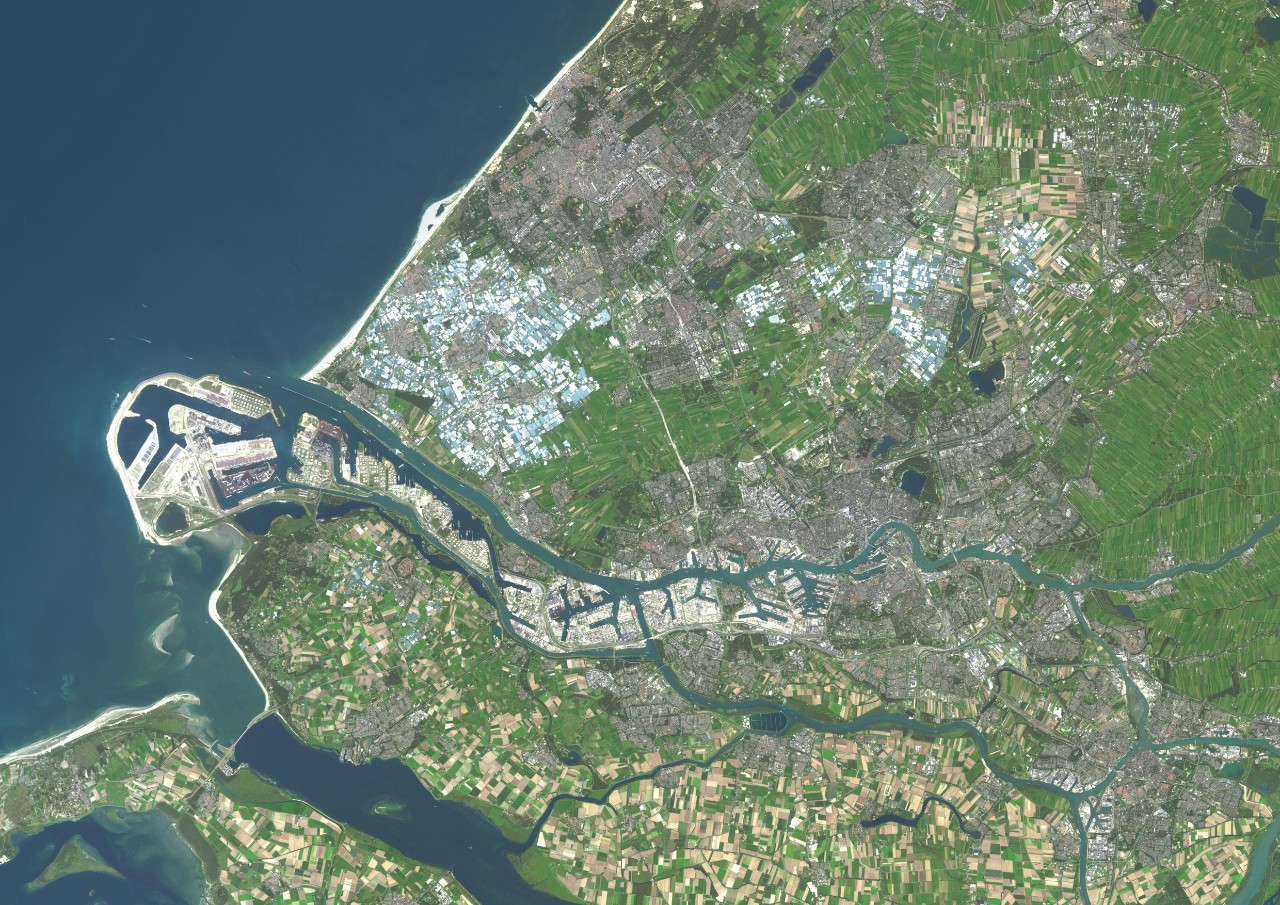 Above: A satellite view of Rotterdam shows how low-lying land is prone to flooding.

Can the city soak up water, store water and then give it back to its environment in the same way a sponge naturally does?

Since 2013 Rotterdam has had an ambitious strategy for adapting to climate change. As well as municipal projects, there are projects instigated by local residents and businesses, all aiming to future-proof the city. One such scheme is a two-storey floating dairy farm which opened in December 2018 in a disused city harbour called Merwehaven. On the upper level will be a herd of 40 cows producing milk that will be immediately pasteurised and processed into dairy products on the level below. The passionate man behind the scheme, a developer called Peter van Wingerden, believes the current system of dairy farming – with its inherent truck and air miles, and centralised distribution centres – is completely unsustainable. He also has plans to open a floating chicken farm.

Elsewhere in the city there’s a project for 18 floating homes in Nassauhaven, one of three former harbours designated for residential use. This is also the location of one of Rotterdam’s two new tidal parks. Used as an alternative to protective dikes, these involve planting riverbanks with vegetation to defend against flooding and restore wetland ecosystems. The idea is that climate-proofing the city increasingly means working with the ebb and flow of the tides instead of against them

In Rotterdam’s former industrial district, Zomerhofkwartier (or Zoho for short), there are several small-scale water management programmes in operation. Streets have had their paving removed and replaced with plants or permeable tiles that capture water before slowly releasing it back into the earth. A new sloping rain garden with picnic tables, pathways, stepping stones and plant beds has been carved out of former parking spaces in the southern end of the neighbourhood to prevent huge puddles forming in the streets.

Even the huge timber-clad ZOHO sign placed here (designed by Rotterdam designer Bas Sala), is helping manage the water: it both marks the entrance to the quarter, and doubles up as a solar-powered rainwater storage system. When a heavy rain shower is forecast, the tanks increase their capacity by releasing their water into the garden automatically.

Water management has become a hallmark of this Dutch city. And architects like van Peijpe are becoming increasingly bold with their ideas. One project he would particularly like to see come to fruition is a linear public park, similar to New York City’s High Line, stretching two kms along the disused Hofplein railway viaduct that crosses the city centre. Instead of being just a green recreational space, however (which is the most popular plan), he would like it also to become a water-purifying and filtering aqueduct, to which rainwater from local streets, the water square, or even the nearby canal would flow before being recycled. That way it would give something back to the city residents. “If we could get the water to the highest-quality level, people could make beer with it,” he says. “Or they could have a hammam up there.”

When you live in a bathtub, the possibilities are endless.