Masters of the Universe

In the 21st-century space race, it’s billionaire entrepreneurs rather than superpower governments fuelling rockets to the stars. What’s driving the likes of Elon Musk, Jeff Bezos and Richard Branson? And what do they realistically hope to achieve? Dominic Bliss finds out.

This July 2019, it will be exactly half a century since Neil Armstrong made his “giant leap for mankind”. Not since the end of the Apollo programme in 1972 has a human being travelled beyond low-Earth orbit. But if billionaires such as Elon Musk (he of Tesla and PayPal fame) and Jeff Bezos (founder and CEO of Amazon) have their way, that could all change a lot sooner than we think.

By 2023, perhaps? That’s when Musk’s spaceflight company SpaceX plans to fly paying passengers (Japanese billionaire Yusaku Maezawa plus guests) in a huge loop around the Moon; price to be confirmed. Virgin Galactic, under the chairmanship of British billionaire Richard Branson, has already sold tickets (at US$250,000 per person) for suborbital flights above the Earth’s atmosphere.

The long-term goals of these entrepreneurs are far more ambitious than mere space tourism, however. Both Musk and Bezos have their sights set on Mars and beyond. The former is driven by the fear that Earth might eventually succumb to an extinction event so that a colony on Mars will ensure humanity doesn’t die out. The latter wishes to relocate all heavy industry to the Red Planet, thereby preserving Earth’s own ecosystem. “The people who go into this business do it because they are missionaries,” he says.

Both are noble aims. But are there other factorsat play? Aside from rocket propellant, what else is fuelling this new space race? 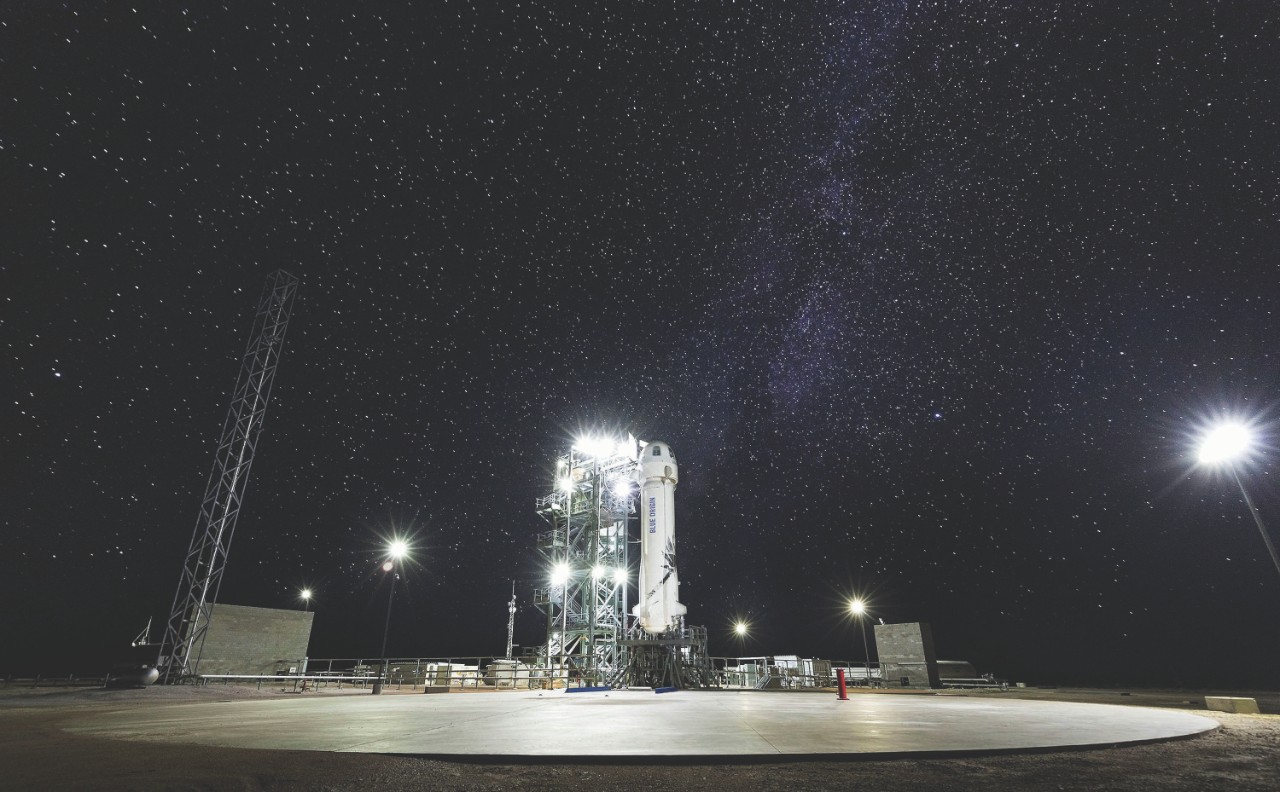 Above: Blue Origin's New Shepard rocket is designed to take off and land vertically.

Musk, Bezos and Branson are all striving to reduce the cost of space flight – SpaceX and Blue Origin through reusable rockets, and Virgin Galactic through spacecraft mounted on carrier aeroplanes. As their legacy to humankind, all three have said they wish to play a part in accelerating man’s exploration of space. Bezos explained in a recent interview: “If I’m 80 years old, looking back on my life, and the one thing I have done is make it so that there is this gigantic entrepreneurial explosion in space for the next generation, I will be a happy, happy man.”

Christian Davenport is author of a new book called Space Barons: Elon Musk, Jeff Bezos, And The Quest To Colonize The Cosmos. A journalist at the Washington Post, he has spent much of the last few years studying these three space barons close up. “A common theme driving these billionaires is that they want to recapture some of the glory and triumph and unification of the 1960s-era space age,” he says. “In 1969, we went to the Moon, 250,000 miles away. Today we go to the International Space Station, only 250 miles away. This doesn’t represent the ambition we saw during the Apollo era. [Back then] people thought that by today there would be a base on the Moon. These space barons are disappointed that we haven’t gone further since then.”

If they're successful, they will be seen as the entrepreneurs and visionaries who enabled the infrastructure that opened up space to the masses. 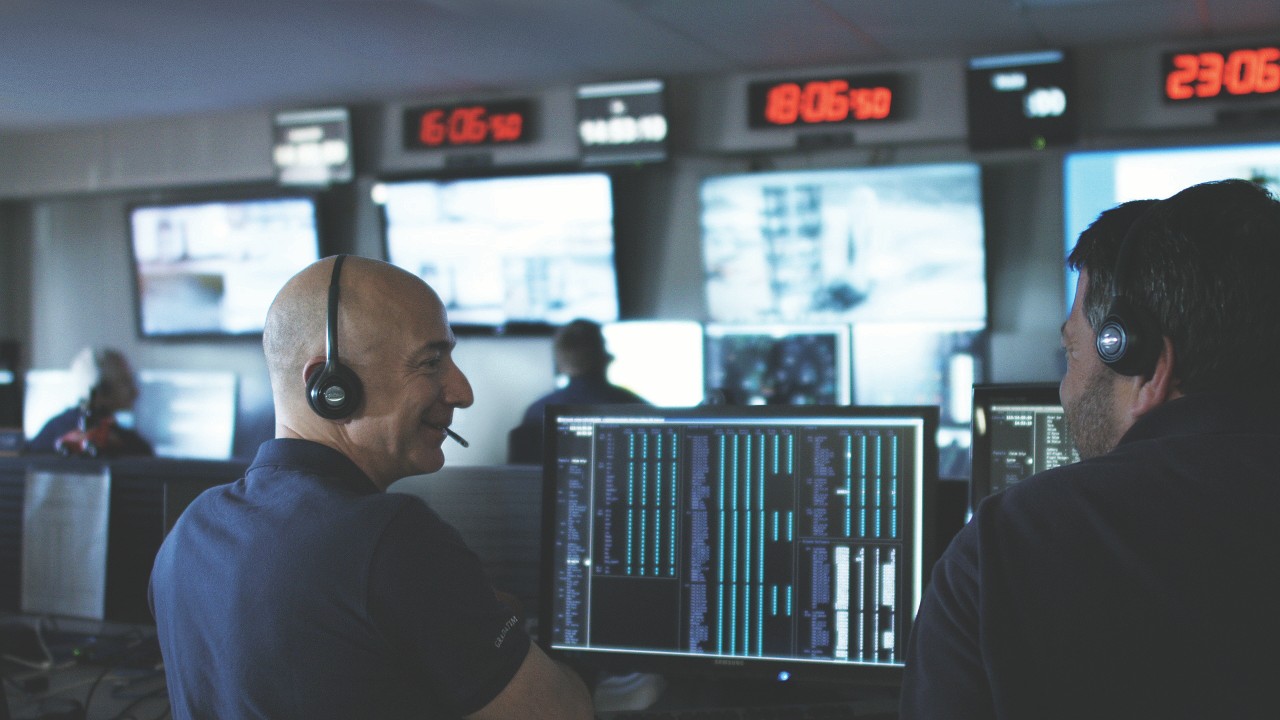 There are perhaps psychological factors, too, driving these wealthy men to spend billions on hurling rockets into space. Arrogance, vanity and self-aggrandisement must all play a role.

In Musk’s case, a miserable childhood could partly explain his extra-terrestrial ambitions. In the biography Elon Musk: How The Billionaire CEO Of SpaceX And Tesla Is Shaping Our Future, author Ashlee Vance describes how the “reserved, geeky, know-it-all outsider” had an atrocious relationship with his now estranged father, and was bullied viciously at school in South Africa. “The boy crept up behind Musk, kicked him in the head, and then shoved him down the stairs,” he writes of one school incident. “Musk tumbled down the entire flight, and a handful of boys pounced on him, some of them kicking Musk in the side and the ringleader bashing his head against the ground.” The beating required hospital treatment. Musk later had plastic surgery on his broken nose.

Davenport suggests this childhood bullying may have instilled a combative attitude in the adult Musk which helped him challenge “the military-industrial complex that has dominated the space industry in the US for a long time. Musk had to scrap and fight his way into the market. It’s hard enough to build a rocket that can get to orbit, but in addition to that he had to break into a market that had been dominated by some very big companies, and win the trust of the US government, [proving that] this eccentric billionaire from South Africa with no experience in space could be successful in the industry. That was not an easy task.”

As a youngster, Bezos was geeky too, obsessed with computer games and Star Trek. He later named his dog Kamala, and his holding company Zefram, LLC, after characters from the sci-fi series. He even managed to secure a cameo role as an alien in the 2016 movie Star Trek: Beyond. As his biographer J.R. MacGregor explains in Jeff Bezos: The Force Behind The Brand: “He is the kind of guy who could tell you why the Starship Enterprise can go into warp and why it maxes out at Warp 9.”

Ultimately, though, the strongest motivation for these space barons is one another. There’s no doubt there’s serious antagonism between the equally iron-willed bosses of SpaceX, Blue Origin and Virgin Galactic. But, just like the space race between USA and the Soviet Union in the 1960s, rivalry fuels rockets. As Davenport explains, “They know the only way they’re going to succeed is if they have someone else driving them. Bezos and Musk know the value of competition.”

Davenport says it’s clear that, technologically, SpaceX is well ahead of the pack, with a flight manifest that includes multiple rocket-launches into orbit and cargo resupply missions to the International Space Station. By contrast, Blue Origin’s rockets have not yet reached orbit.

“But neither company has successfully flown a human being into space,” Davenport warns. “If you’re talking about Mars, I think it will be a collaborative effort. Mars is so difficult that it will take many members of industry alongside NASA and other countries as well.” He talks of the tension between SpaceX, “a hard-charging California company which still retains its start-up ethos”, and NASA, “a much more cautious, risk-averse government agency”. He adds: “Ultimately, [for Mars] maybe the sweet spot is somewhere between the two.”

SpaceX claims it will send crewed missions to Mars by 2024, eventually building a permanent base there. With slightly less chutzpah, Blue Origin has its sights set on establishing a Moon base as a stepping stone to the Red Planet. Even if you take this all with a pinch of salt, you’ve got to admire the Silicon Valley bravado.

Musk is 47 years old, Bezos 54, and Branson 68. Obviously none will live to see human beings spreading out across the Solar System. So perhaps their ultimate goal is to be lionised in history as great space pioneers.

In a thousand years’ time, will space-faring humans remember these billionaires in the same league as Christopher Columbus, Ferdinand Magellan and Neil Armstrong? “If they’re successful, they will be seen as the entrepreneurs and visionaries who enabled the infrastructure that opened up space to the masses,” says Davenport.

Interestingly, while everyone remembers the likes of Columbus, Magellan and Armstrong, no one remembers the engineers who built the craft that transported them. Perhaps it won’t be our space billionaires who are lionised, rather the astronauts who ride their rockets, and eventually set foot on other planets.

“That would make sense,” Davenport concludes. “After all, they will be the ones risking their lives.”

Three contenders are lined up on the launch pad.

BFR
118 metres tall, SpaceX’s BFR(Big Falcon Rocket, or Big F***ing Rocket, depending on who you ask) is a reusable spacecraft currently in development. Composed of a booster and a ship, it is designed to transport up to 100 crew on inter-planetary flights.

New Glenn
Blue Origin is developing a three-stage rocket (the first stage is reusable) called New Glenn. Ninety-nine metres tall, it is named after John Glenn, the first American to orbit the Earth.

SpaceShipTwo
Currently being tested is Virgin Galactic’s SpaceShipTwo, a suborbital spaceplane which is carried to launch altitude by a cargo aircraft before powering its rocket engine. It is designed to carry space tourists and scientific payloads.