Trips deep beneath the ocean

Submarine design and technology has opened up the ocean depths to amateur explorers. But what can they discover beneath the waves?

“It is almost indescribable how excited all of us are about achieving what we just did. This submarine took marine technology to an unprecedented new level by diving into the deepest, harshest area of the ocean. We feel like we have just created and opened a powerful door to discover and visit any place, any time, in the ocean.”

These were the words of ocean explorer Victor Vescovo after he returned from his dive to the deepest point on Earth. In April 2019, in a specially constructed submarine called DSV Limiting Factor, he made a solo dive 10,928 metres beneath the western Pacific Ocean into the abyssal Mariana Trench. The very deepest spot within this trench is the eastern pool of a valley called Challenger Deep. Just how deep? Well, if you could place Mount Everest within it, the mountain’s summit would still be over two kilometers beneath the ocean surface. The record dive was part of Vescovo’s now completed mission to visit the deepest point in each of our world’s five oceans.

The water pressure down this low is over a thousand times the atmospheric pressure at sea level. Fortunately, Vescovo’s submarine was made of sturdy stuff. Designed and constructed by Florida-based company Triton Submarines, it measures 4.6 metres long, 3.7 metres high, and 1.9 metres wide, looking more like a giant suitcase than a traditional cylindrical submarine. Inside, accessed via a hatch on top, there’s a spherical pressure hull, forged from nine-cm-thick titanium, with space for two occupants who can observe the underwater world outside through 20-cm-thick acrylic viewports. Electric thrusters allow the DSV Limiting Factor (or LF, for short) to move around at up to three knots, while bright LED lights illuminate the murky depths.

But what can they expect to see 10,000 metres below the waves? John Ramsay is the engineer who designed the submarine. A week after Vescovo set the new depth record, he also took it down into Challenger Deep. “Mostly anemones and little shrimp-like things,” is how he described what the craft’s lights picked out in that alien world. “Little white creatures scampering around the sea bed.”

Of course, not all underwater explorers wish to dive quite so deep as Vescovo and Ramsay. In fact, if it’s marine life you’re interested in, then the majority of it swims at shallower depths. 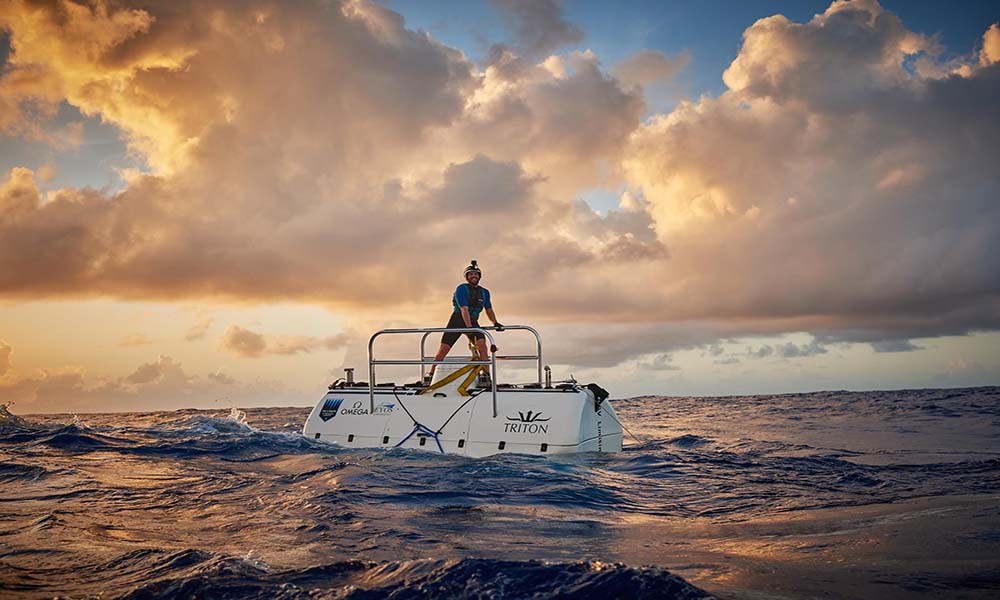 Above: The DSV Limiting Factor, a specially constructed submarine used by ocean explorer, Victor Vescovo to dive to the deepest point on Earth.

Descending from the ocean surface, a submarine passes through several zones. Although the demarcations of these zones differ depending on salinity, temperature, algae and the penetration of sunlight, most marine scientists agree on the following: first, is the sunlight (or epipelagic) zone, which stretches from the surface down to around 200 metres; then the twilight zone (200 to 1,000 metres); the midnight zone (1,000 to 4,000 metres); the abyssal zone (4,000 metres to a depth where much of the ocean floor lies); and finally the hadal zone (deeper than 6,000 metres).

Most submarine manufacturers concentrate on craft designed for the shallower zones. As well as its LF, Triton offers nine other models intended for depth ranges of between 300 metres and 2,300 metres.

Another leading manufacturer is U-Boat Worx, based in the Dutch town of Breda. They produce a range of models, accommodating between one and 11 occupants. The sturdiest is the two-person C-Researcher 2 which can dive as deep as 3,000 metres, and operate for up to 18 hours. Resembling the cockpit of a 1960s helicopter, it features a spherical acrylic pressure hull with views in all directions. Then there’s SEAmagine, a California-based company which builds submarines for between two and six occupants. Its Aurora-3 model, with room for three people, can dive to 2,500 metres. 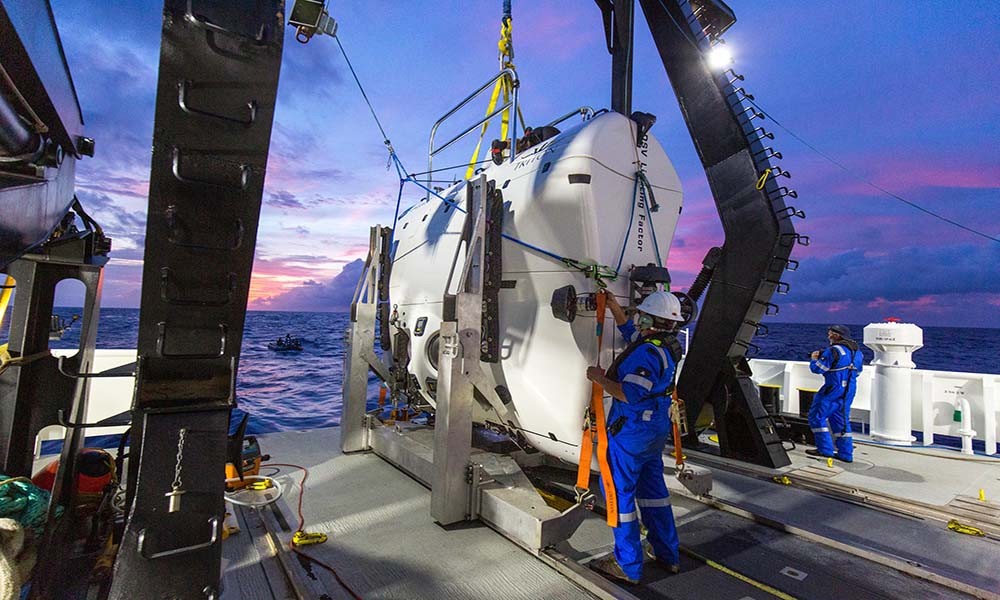 Above: The DSV Limiting Factor, the submarine used in Victor Vescovo's dive in the Mariana Trench.

Another California-based manufacturer is Deepflight. Their most impressive sub, looking like something straight out of a James Bond movie, is the Super Falcon 3S. Shaped like an aeroplane, it is eight metres long with a large fin on each flank and four small fins at the rear. There are three hemispherical, acrylic view ports, affording the pilot and two passengers 360-degree views as they glide  along at four knots. With a maximum operating depth of 100 metres, this is very much aimed at the tourist market, and designed to view wildlife, coral reefs and shipwrecks within the ocean’s shallower zones.

For real adventure, however, submariners must head a lot deeper. One of the world’s most experienced deep-sea explorers is marine biologist Dr Jon Copley. A specialist in deep-sea hydrothermal vents, he is author of the book Ask An Ocean Explorer, and has worked as scientific advisor for the BBC TV series Blue Planet II.

In his book he describes some of the weirdest and most wonderful species he has encountered beneath the waves. The benthic siphonophore, for example, or “flying spaghetti monster”, as it’s known among marine biologists. Copley once spotted one 650 metres down in the Gulf of Mexico. It’s not a single animal, he explains, but a colony of polyps, all sharing a digestive and nervous system.

Other deep-sea favourites include a worm-like creature called Yoda purpurata, named after the Star Wars character, thanks to its bulbous head; and a crab called Kiwa tyleri, nicknamed “the Hoff crab”, in honour of the American actor David Hasselhoff, thanks to its very hairy chest.

In his book, Copley becomes very animated when describing a trip he made in a submersible to the ocean floor off the coast of Antarctica. “We found yellow feather stars with arms like dusters,” he writes. “There were sponges as big as barrels, with mantis-like crustaceans crawling on them and waving their legs up into the water to filter food from it. Darting among them were dragon-faced icefish. There were also huge sea spiders with leg-spans 40cms across, striding over the sea floor like the long-legged alien machines from War of the Worlds, and sometimes our lights would silhouette a grainy-skinned octopus gliding about with its arms trailing behind it like a cape.”

So, what chance is there for amateur submariners who wish to follow in the trail of explorers such as Copley and Vescovo? Anything is possible, provided you’re willing to pay, of course.

While shallow submarine dives are affordable, deeper trips require even deeper pockets. American operator OceanGate, for example, is offering submarine dives down to the wreck of the Titanic, 3,800 metres below the North Atlantic. A ticket for the trip, in summer 2021, is expected to cost more than US$100,000.

Even more adventurous is a dive being offered by Isle of Man-based EYOS Expeditions down to Challenger Deep, in the Mariana Trench. It’s part of an eight-day voyage this summer, with ticket prices at US$750,000 each.

Rob McCallum is one of the company’s founding partners. He was also expedition leader on Vescovo’s mission to visit the deepest point of the world’s five oceans. What he is offering is arguably the most intrepid deep-sea adventure anyone could buy.

“The average depth of the world’s ocean is around 4,000 metres, and 90 per cent of it has never been explored,” he says. “This is the next frontier. This is inner space.” 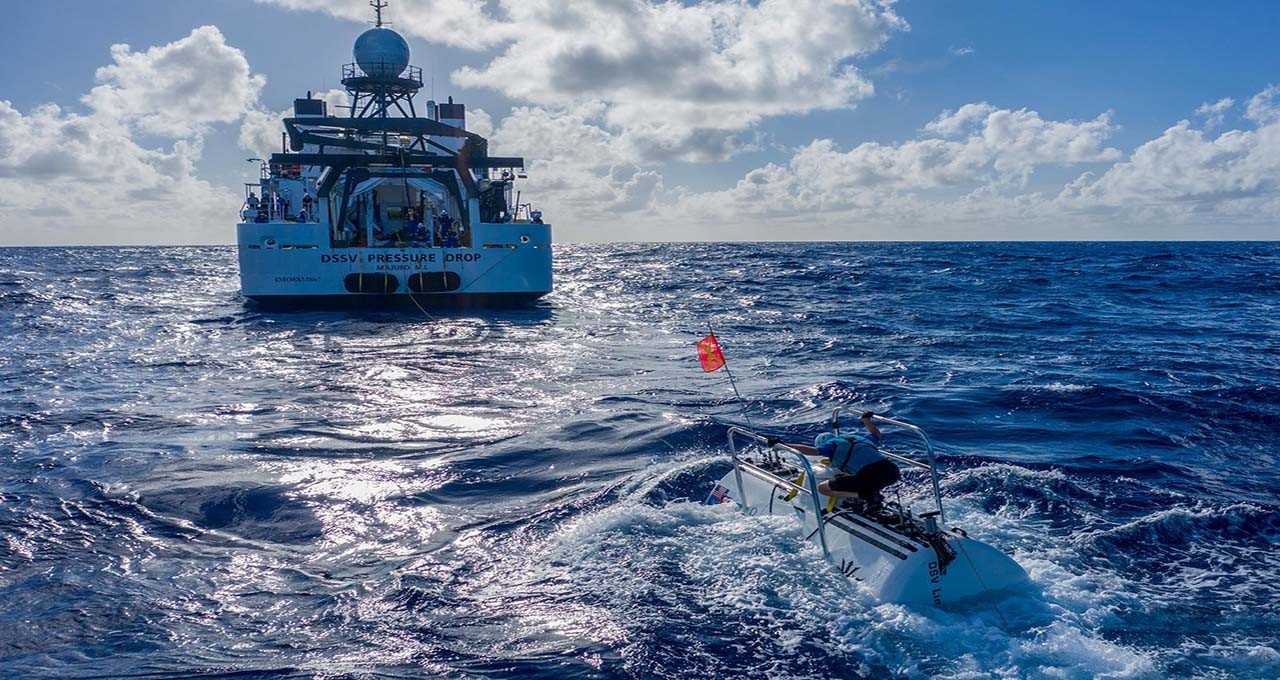 Above: The DSV imiting Factor submarine in the Mariana Trench, located in the western Pacific Ocean.