Wonder Woman, unexploded ordnance,  porpoises, shipwrecks… all in a day’s work for  the hydrographers on the mighty River Thames,  as Colin Hubbuck discovers.

Down on the riverbed, at the bottom of the Thames, it’s so dark and murky that divers struggle to see their hands in front of their faces. No such problems for the hydrographers working for the Port of London Authority. Their data-gathering equipment is so high-tech that they claim they can identify items on the riverbed only 12cm long. Just as well since it’s their job to ensure the entire London stretch of the Thames – 400 square miles in all, from Teddington in the west to the North Sea in the east – is safe for river traffic.

And sometimes that traffic can be very large indeed. Like the 400-metre-long container ship, the Al Muraykh, which has docked at London Gateway (the capital’s container terminal) with over 18,000 containers on board. This ocean-going behemoth wouldn’t have found its way up the shipping channel without the maps and navigational information provided by the PLA surveyors. It’s fair to call them the unsung heroes of London’s shipping industry.

Jim Powell is senior surveyor at the PLA. On board one of his team’s five vessels, the Maplin, on a recent trip to survey the edges of the shipping channel close to London Gateway, he explained the challenges he faces. “The river is constantly changing. It doesn’t stand still. We get regular users up in the shallow end (as they call the western end of the tidal Thames) who say: ‘We think we touched the bottom here’. So we’ll go and have a look. When there were the floods a few years ago, all the sand shoals that we knew were there suddenly disappeared. Where did they move to? We had to investigate.”

Part of Powell’s role is to produce 3D images of underwater infrastructure; calculating the volume of material that needs to be removed prior to a dredging or demolition operation, for example. They inspect walls, weirs and power station pipes. Often commercial companies will have old plans of their buildings which the surveyors can update and correct. If need be, they can pinpoint the best spot to drop a diver, saving time and cost.

Passing a colony of seals sunning themselves on the sandbank, Powell extols the virtues of his job. “Working on boats is a bit addictive, even in rough weather. We work right up in central London with a lot of traffic, or right out in the estuary where you can’t see land. You see harbour porpoises, seals, loads of cormorants. You never get tired of sights like that.” 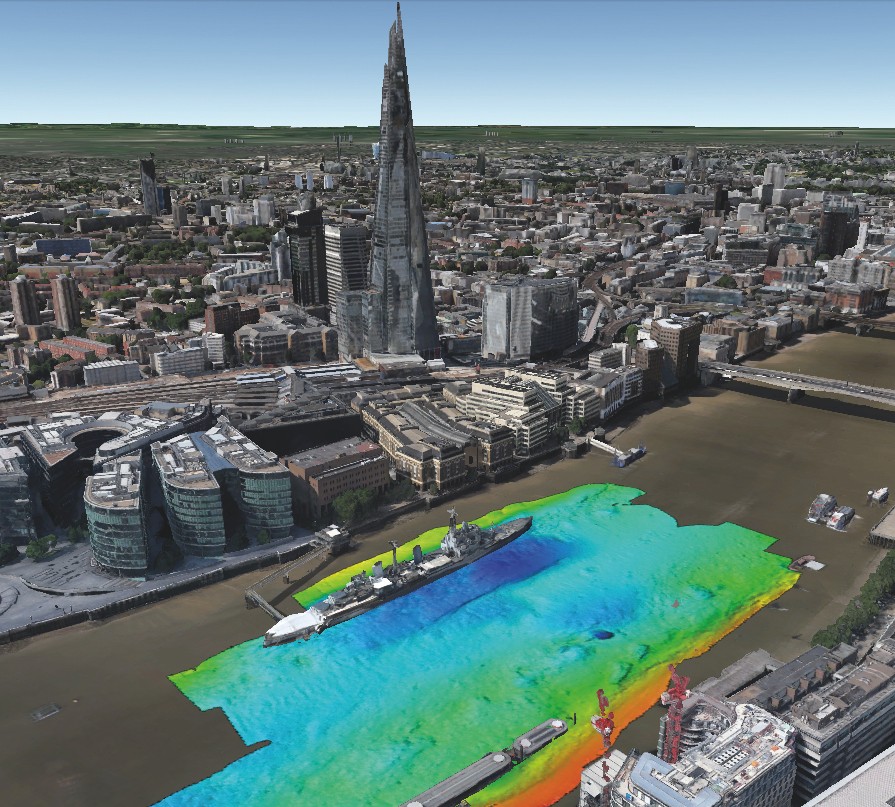 Above: One of the Port of London Authority's scans of the Thames riverbed.

Segments of the superhero movie Wonder Woman were filmed at Tilbury Fort, on the north bank of the Thames. Powell and his team saw all manner of action movie-type explosions. Further east is another rather explosive spot – the Shoeburyness firing range.

“We’re currently working on a survey which takes us right into the range,” Powell adds. “But we can only go in when the firing range is inactive. You see tanks on the beach, phosphorous tracers, things blowing up, massive clouds of smoke. They test all kinds of stuff, so this area is littered with ordnance.”

The hydrography team are quite used to ordnance, however, since there is still so much left over from the Blitz during the Second World War. “Our salvage guys found a big camouflage mine and nobody knew what it was apart from one of our old guys,” says Powell. “They were hitting it with hammers and he was saying, ‘I don’t think you should be doing that’. They had to shut down the whole salvage craft until bomb disposal experts from Portsmouth could come up and do a controlled explosion.”

Thames shipwrecks are a regular feature of their daily work, too. “We’ve got a database of 800 wreck entries,” Powell says. “Some of them look quite nice when viewed through our equipment. There are a few old lightships that sank with their anchors and chains.”

Powell also helped the Royal Air Force locate a submerged German Dornier Do17 bomber from World War II off the coast of Dover. The salvaged aircraft is now in the RAF Museum in Hendon. “The plane was upside down,” Powell remembers. “You could see the bomb bay and the propellers. It was amazing.”

At the height of the British Empire, London was the largest port in the world. So the Thames has been mapped for hundreds of years. In the Museum of London there are hand-painted charts dating back to the 1800s. “When you look at the depths on these old charts, they’re quite similar to what they are today,” says Powell. “I suppose we are the modern equivalent of the guys measuring depths with sounding lines. Except they collected just a handful of depths. Nowadays we’re collecting millions.” 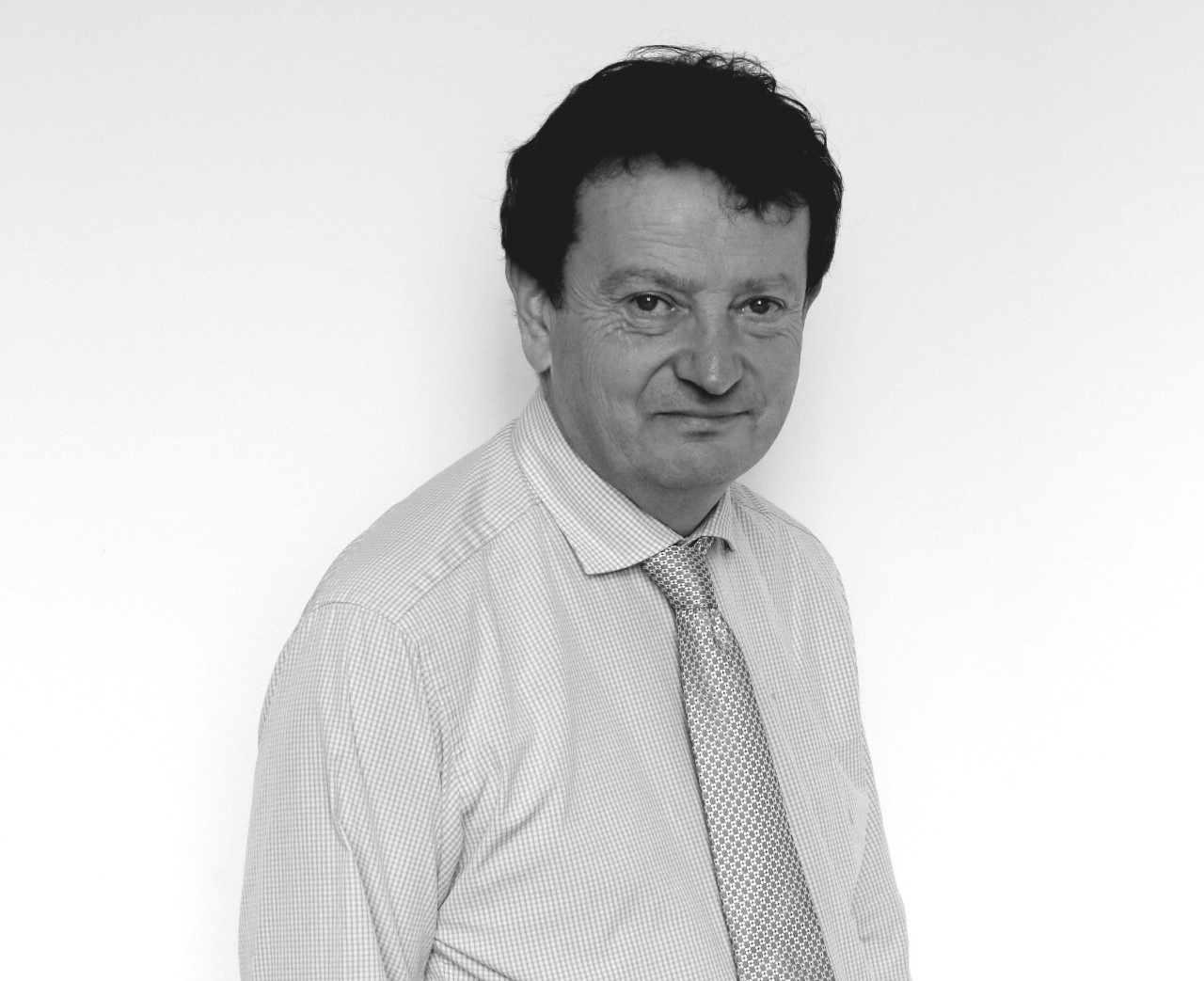 I enjoy a perfect start to my day by commuting to work along the River Thames on one of the catamaran commuter boats. Gliding past the Houses of Parliament, on my way to the City of London, I can see the Royal National Lifeboat Institution station on Waterloo Pier which we’re proud to insure along with numerous other RNLI piers and lifeboats. My nine-mile trip also reveals the many construction vessels we insure. They’re hard at work extending piers for docking, or working on the Thames Tideway scheme, a replacement for Sir Joseph Bazalgette’s 1865 sewerage system which was never intended for today’s eight million Londoners. Finally, in the Pool of London, I catch a glimpse of other marine hulls we support, evidence of London’s rare capacity to host at its very heart some of the finest and largest ships in the world.