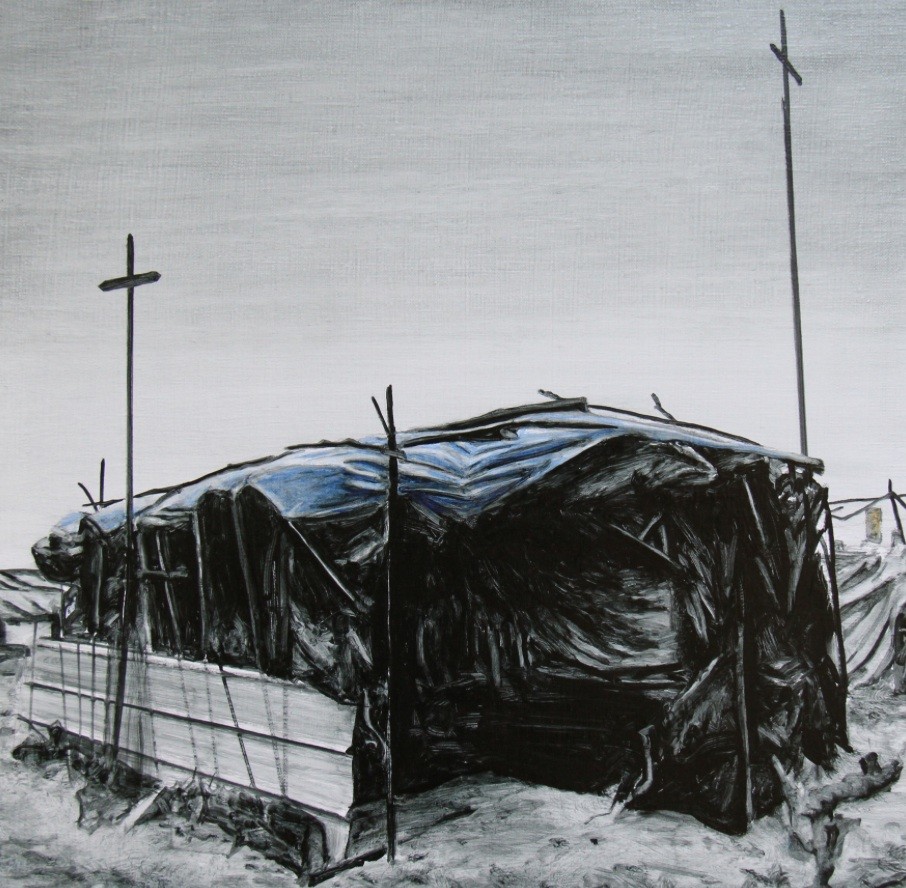 LONDON, TUESDAY 21st NOVEMBER 2017: Marguerite Horner’s stark and beautiful painting entitled Church has been announced as the winner of the MS Amlin Continuity Prize. Part of the National Open Art (NOA) competition, the prize is sponsored by MS Amlin, the London-based arm of Japanese global insurer MS&AD. The MS Amlin award asked artists to respond to the theme: ‘Continuity in an uncertain world’.

Inspired by the artist’s visit to the first Calais Refugee Jungle in 2014 – the winning painting is part of a show called ‘Keep Me Safe’.

“Despite the lack of material comforts in the camp, there was a human solidarity that was still there, giving meaning to their situation.” Explains Marguerite Horner “And the church, made out of simple things such as plastic and wood, was the space that brought people together. Church is a record of that time – a symbol of hope and faith when people’s lives were falling apart”

As well as winning £5000 the winning artwork work will be exhibited at the 21st National Open Art Exhibition which runs 17th to 26th November 2017 at the Oxo Tower’s Bargehouse.

Commenting on the winning painting, MS Amlin’s Global Director Communications, Adrian Britten said: “In Marguerite’s piece we see how people feel they want to face life’s uncertainties together, to share the challenges and support each other, and these are concepts at the heart of our insurance business.  With over 950 submissions for this award I congratulate Marguerite and we should celebrate everyone who made it to the shortlist for the vibrant cultural life they help us to enjoy.”

Now in its 21st year, the National Open Art competition (NOA) is widely recognised as the UK’s premier open art competition that exists to nurture emerging and established artists (professional and amateur) based in the UK and Ireland. The winning artwork for the MS Amlin Continuity Prize was decided on by an industry panel including: Kate Packenham, Excecutive Producer, Donmar Warehouse; Steve Dinneen, Lifestyle Editor, City AM; Brittany Golob, Editor, Transform Magazine and Andrea Harari-Dickson, Director, Jagged Art Gallery London.