A new underwater park in the Arabian Gulf offers both diving tourism and marine research.

Air Atlanta Icelandic used to have an old Boeing 747 flying cargo for its fleet. During its 38-year lifetime, it also served for Malaysia Airlines and Focus Air. Right now, that aeroplane is sitting 20 metres down at the bottom of the Arabian Gulf, the centrepiece of a new underwater theme park called Dive Bahrain.

When the park opens later in 2019, there will be other submerged features such as a replica of a traditional Bahraini pearl merchant’s house, and sculptures of sails similar to those you find on traditional Arabian fishing boats. Eventually, the owners of this 100,000 square-metre park, which lies around 50kms northeast of Bahrain, will add sunken boats and sculptures, and will propagate new coral reefs.

It’s all the brainchild of the Bahrain Tourism and Exhibitions Authority. A spokesman for the park (who preferred not to be named) explained how visitors will be able to dive there on trips organised by licensed Bahraini dive operators. Some features – such as a coral reef on top of the pearl merchant’s house, at just eight metres in depth – will be ideal for beginners while others will only be accessible to more experienced divers. “We want this to have as broad an appeal as possible,” he said.

Bringing a 70-metre-long decommissioned Boeing 747-200 out into the Arabian Gulf was no mean feat of engineering. The last flight this aeroplane made ended at Fujairah International Airport in the United Arab Emirates. The previous owners had planned to repurpose it for future flights but it proved economically unviable. That’s when the Bahrain Tourism and Exhibitions Authority took possession of it.

Once all the valuable components had been salvaged, the Boeing’s engines, landing gear and wings were then removed. All these parts plus the main fuselage were transported by road to a nearby port, and then by barge to northern Bahrain. Here, it was finally stripped down to its bare aluminium shell, which involved “removing wires, hydraulics, aerial and fuel systems, adhesive, plastic, rubber, chemical materials, and all possibly toxic substances”. 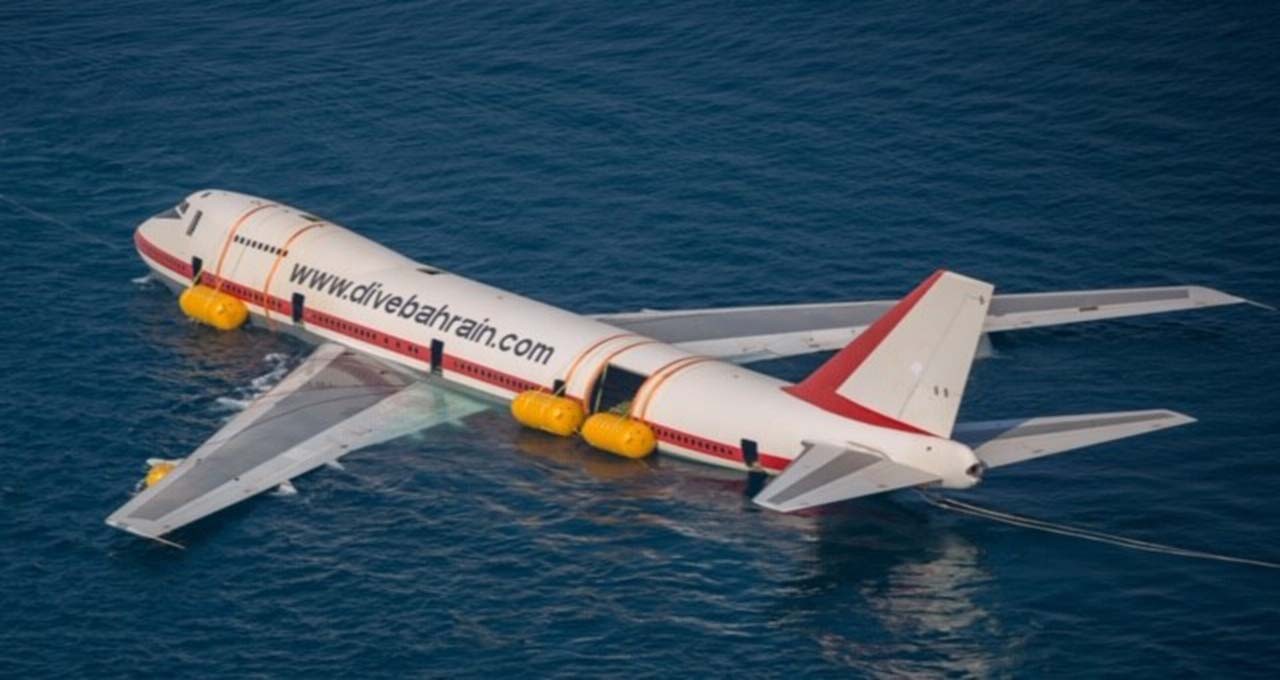 Finally, the wings were reattached, and the entire craft was floated on huge airbags out to the dive site, before it was sunk to its final resting place.

But will the metal shell itself – a mixture of cast and sheet aluminium – damage the marine environment?

The spokesman for the park insists not. “The speed of the marine growth over the top of the aluminium will probably be quicker than any oxidation, so we’re not going to get any rust,” he said. “If anything, it will go like a soda can does after 20 years in the water. It just becomes very, very thin.”

He added that the pH levels of the sea in the Arabian Gulf would react well with the aluminium and be “hospitable to marine growth”.

The new theme park will undoubtedly emerge as a global tourist attraction. It will position Bahrain as a global leader in the field of eco-tourism and marine wildlife preservation

Just like land-based theme parks, Dive Bahrain plans to keep adding new features to encourage divers to make multiple visits. “The idea is to keep the park dynamic,” said the spokesman. “It would be imprudent and logistically impossible for us to put all the attractions down at once. Because it’s marine, the habitats are dynamic. If someone was to visit the [submerged] aeroplane today, they will see certain configurations and types of fish. But if they came back a month later, because of the habitat, the weather and the water, there would be new things they had not seen before.”

As well as tourism, the park has an important scientific purpose. The owners intend for marine science students from Bahrain and abroad to use the park for research. 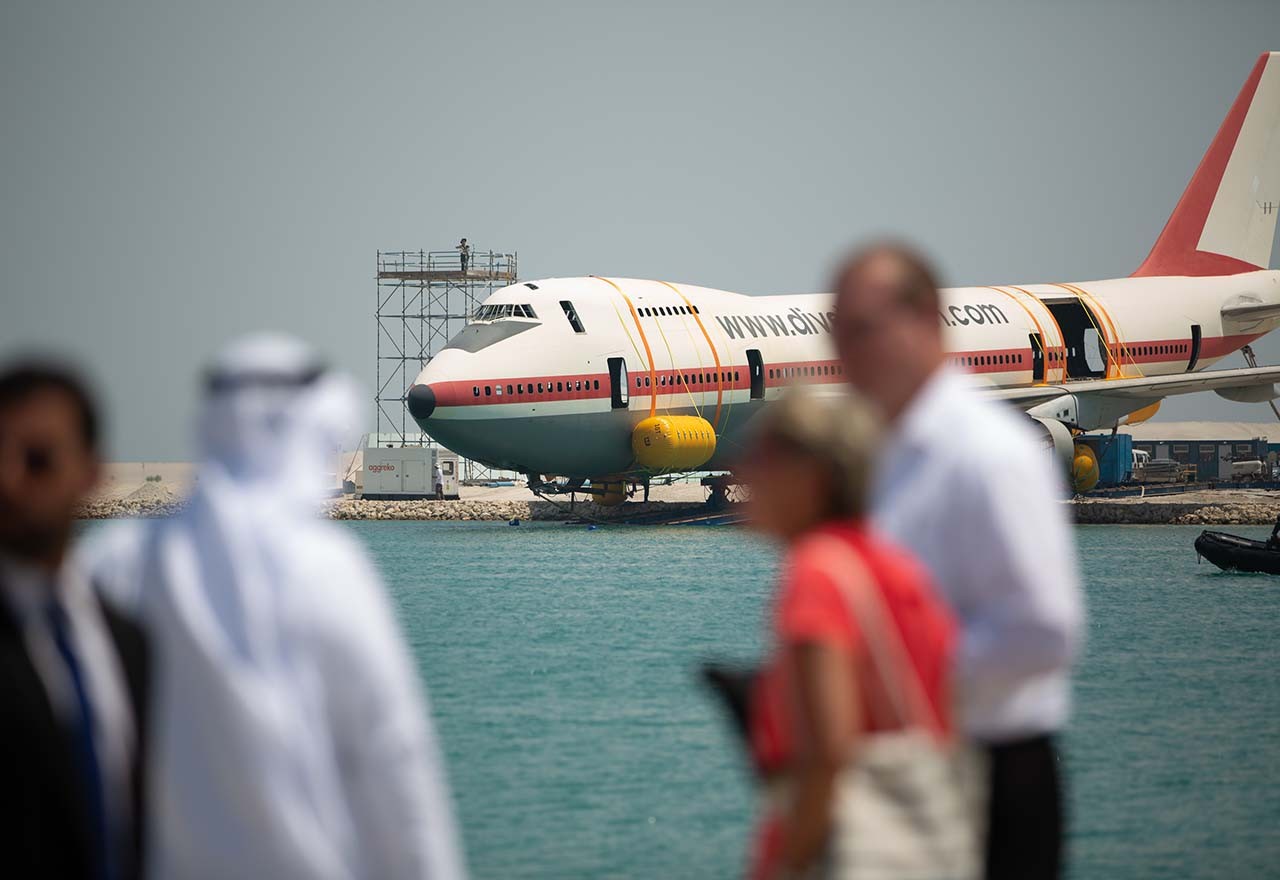 “The area we selected is pretty much a desert underwater,” said another spokesperson. “As soon as the Boeing was submerged, two days later we had schools of fish around the aircraft. We expect barnacles to attach to the body of the aircraft and different species to then come to the area. We do think this park can offer a lot to university students.” The Arabian Gulf University in Manama is expected to take a particular interest.

But, ultimately this is a bold attempt to increase tourism to Bahrain. “The new theme park will undoubtedly emerge as a global tourist attraction,” says Zayed bin Rashid Al Zayani, chairman of the Bahrain Tourism and Exhibitions Authority. “It will position Bahrain as a global leader in the field of eco-tourism and marine wildlife preservation.” 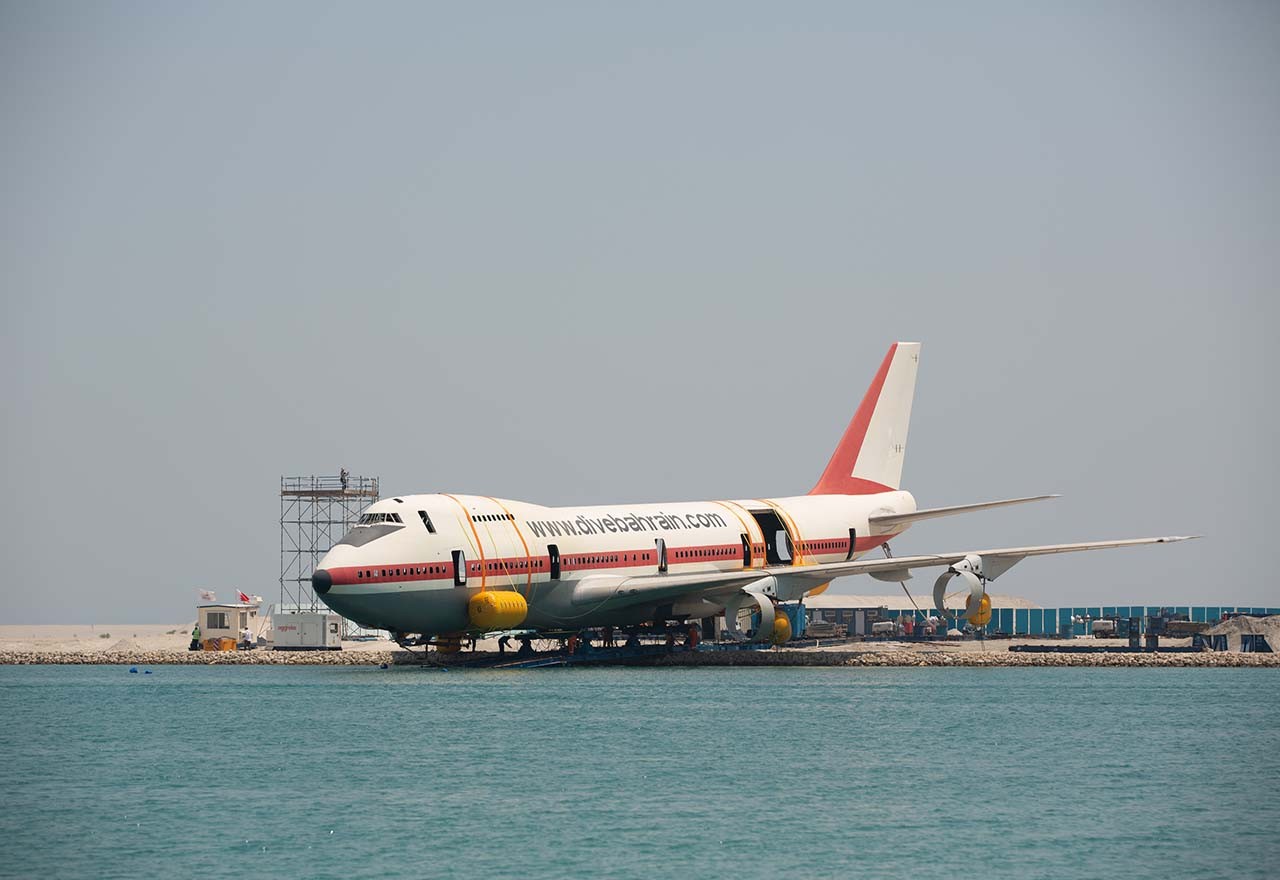 The Dive Bahrain Boeing is by no means the first aeroplane to be deliberately sunk as a dive site.