A sea change in renewable energy

Ocean wave energy is still a nascent technology with teething problems. But the potential is enormous, as leading engineers in the field explain.

“Wave energy could eventually produce a fifth of the world's entire energy demands.”

This is a bold statement from Matthew Dickson, technical project manager at Swedish wave energy company CorPower Ocean. A leader in this form of renewable energy, the Stockholm-based company has a vested interest in being positive about the power of ocean waves. But the evidence so far looks promising.

CorPower Ocean are developing a wave energy converter called the C4. Around 20 metres high, with a buoyant head 9.5 metres in diameter, it harnesses the energy of waves as it bobs up and down on the ocean surface, rather like a fishing weight. It is moored to the seabed with a cable and anchor.

To the uninitiated, it looks like a maraca – that Latin American percussion instrument. “Yes, a maraca,” Dickson says. “Maybe that’s what we’ll call it eventually.”

Prototypes have been successfully tested at the European Marine Energy Centre, in the Orkney Islands, off the north coast of Scotland. Already, CorPower Ocean have signed an agreement with an Anglo-Irish company called Simply Blue Energy to supply several hundred devices at yet-to-be-specified locations off the west coast of the British Isles.

This part of northern Europe, where strong swells arrive consistently from across the North Atlantic, is particularly suitable for generating power, as are many areas along Europe’s western seaboard.

According to CorPower Ocean, other suitable spots include vast stretches of coastline along southern Africa, western India, eastern Japan, southern Australia and New Zealand, and the Pacific coastlines of the Americas. 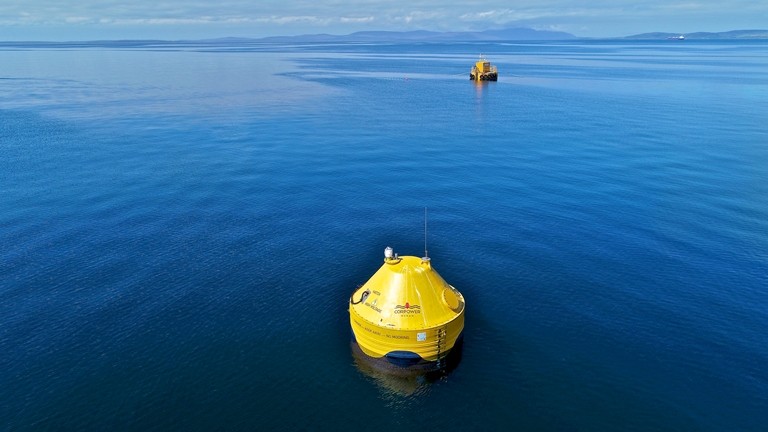 Research by renewable energy experts suggests the Earth’s coastal waves could eventually produce more than 2TW of power. To put this into context, this is 500 times the capacity of the United States’ largest nuclear power station. And unlike wind or solar power, waves of course never stop.

Elaine Buck is technical manager at EMEC (The European Marine Energy Centre). She believes the planet’s waves will eventually provide as much energy as solar power.

“The potential is very big. We know the energy is there in the ocean, but what we don't know is how much we can feed into the grid.”

Buck works with several manufacturers of wave energy converters. She believes the most realistic use of the energy will be close to where it is generated: to power offshore oil and gas platforms, for example, or water desalination plants.

Dickson is more ambitious. He believes wave energy will eventually feed into national electricity grids all over the planet.

So how does CorPower Ocean’s C4 converter actually work? Inside the device are huge springs. The kinetic energy in the waves, the mechanical energy in the springs and the buoyancy of the air inside the converter all combine to generate electricity which is then conducted along cables to the shore and into the electricity grid. 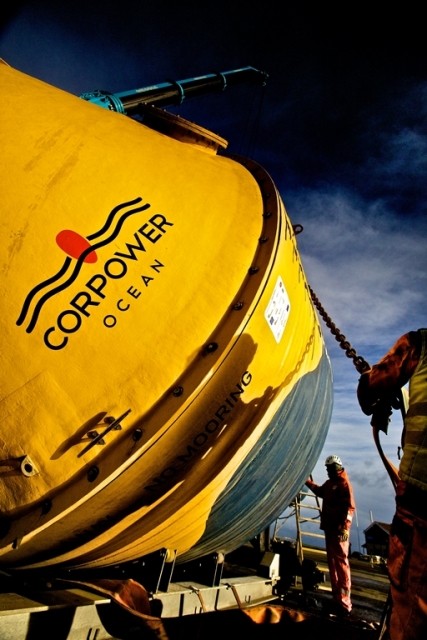 There are several different types of wave energy converters, ranging from point absorbers, attenuators, oscillating wave surge converters and oscillating water columns to overtopping/ terminator devices, submerged pressure differentials, bulge wave technology and rotating mass. Many of these have been trialled at EMEC’s two test sites in the Orkney Islands – Scapa Flow, the sheltered body of water between the main islands, and Billia Croo, not far from the town of Stromness.

CorPower Ocean’s C4 is a point absorber converter, meaning that it floats on the ocean surface and absorbs energy from all directions. Each device has a dry weight of 60 tonnes, and can generate 300KW of power.

The plan is to install them in arrays of 30 or so converters, each array producing around 10MW of power. They would be moored in water around 50 metres deep, where wave power and frequency is optimal, though Dickson says deeper sites are an option.

The potential is very big. We know the energy is there in the ocean, but what we don't know is how much we can feed into the grid.

Previous attempts at commercial wave energy have floundered. A Scottish company, for example, which developed the Pelamis wave energy converter, went into administration after financial difficulties. “That knocked back the industry a bit,” Buck admits. “It was a case of trying to scale up too fast.”

Dickson believes his team's C4 has ironed out many of these teething problems. Should a storm approach, for example, the spring inside can be deactivated so as to protect the internal workings from overly vigorous waves.

Installation of the devices has been streamlined, too, he says. “They are relatively lightweight and easy to install, so you can use smaller, cheaper vessels during installation. And you don't need divers which removes the risk to life and reduces expense.”

In order to secure the C4s to the seabed, engineers operate drills remotely from boats on the ocean surface. Depending on whether the sea floor is rocky or sandy, rock anchors or screw anchors hold the foundations in place.

A major headache for wave energy is the cost of repairing devices when they malfunction. Buck points out how the now defunct Pelamis had developed a quick-release mooring system which made it much easier and cheaper to haul converters back to port for repairs.

Once in operation, wave energy converters are inevitably vulnerable to their harsh surroundings. Dickson explains how the C4’s glass-fibre hull avoids problems of seawater corrosion. Its current operational lifetime is around 20 years.

Another complication is what’s known as bio-fouling, where weed, algae, barnacles and even mussels attach themselves to the converters. The company is currently devising cleaning methods to combat this.

As with any new technology, there are concerns over the effects on the environment. CorPower Ocean is working with university research teams to test the effect of the converters on marine life. He points out how wave farms might end up harbouring fish which typically congregate around man-made objects on the ocean surface, such as oil and natural gas platforms; and how the farms will deter fishing trawlers “which are one of the most environmentally damaging types of fishing”.

He does concede, however, that larger sea animals might be perturbed by an array of converters.

Fortunately, to benefit from incoming waves, the farms will have individual converters spaced at least 100 metres apart, ensuring that even larger whales can't get tangled in the mooring cables.

“If you’re a whale, you’d be quite unlucky to hit one,” Dickson adds. “In fact, our converters would come off worse if a whale managed to knock into one. We haven’t done a full whale-impact analysis, but I think it’s pretty unlikely.”

Even the most ardent environmentalist would agree that the odd bruised whale is a small price to pay for 2TW of clean, renewable energy.