Researchers in the US claim to have invented an ultra-white paint that reflects almost all sunlight and negates the need for air conditoning.

Humans have been painting their buildings white for centuries. Be it the dazzling symbol of power that was the White Temple in fourth-millennium-BC Mesopotamia, or the anti-bacterial qualities of Tutankhamun’s whitewashed tomb, or the modern-day White House in Washington DC, painted to protect its porous stone from freezing.

The reasons for choosing white may change but, in each instance, they reflect current priorities, be it power, health or protection. Now, a new ultra-white paint developed by Professor Xiulin Ruan and his team at Purdue University, in the US state of Indiana, confronts today’s climate-change priority.

A decade ago, scientists at the U.S. Department of Energy’s Lawrence Berkeley National Laboratory calculated that 44 billion metric tonnes of carbon dioxide emissions could be removed from the atmosphere by treating the world’s urban buildings and streets with materials that reflect more sunlight than conventional materials. President Barack Obama’s secretary of energy, Steven Chu, referenced the report in 2009 and didn’t stop at buildings. “If all vehicles used cool colours then they could cut down the air conditioning and we would have a great reduction in energy,” he said.

As ever, political flights of fancy need the grinding reality of hard science, which is where Professor Ruan and his team come in. Last year they developed a white paint using calcium carbonate, capable of reflecting 95.5 per cent of all sunlight that shone onto it. This year, they have gone one better. In place of calcium carbonate, they have turned to barium sulphate which, according to tests, reflects 98.1 per cent of sunlight. They claim a 93-square-metre roof covered with this paint could deliver the same cooling effect as a 10KW air conditioner, with wider implications for building design and costs.

Xiangyu Li worked with Professor Ruan on the research. “Based on the climate conditions and weather zone, the heating, ventilation and air-cooling system design does not need to host as much cooling capability as existing buildings,” he told Chart magazine.

The benefit of using barium sulphate is that it can be added to paint in a much higher concentration (60 per cent) than with compounds currently used, such as titanium dioxide. At the heart of barium sulphate’s enhanced performance is a phenomenon known as spectral scattering. The amount of light scattered by a particle depends on its size. Because of the high concentration of barium sulphate in the paint, there is a wide range of particle sizes, ensuring more of the sunlight’s spectrum is reflected. It is this that makes the paint ultra-white: the more reflective a surface is, the whiter it is, though the naked eye may struggle to spot the difference.

Most currently available paint reflects only 80 to 90 per cent of sunlight, meaning that it can’t make the surfaces to which it’s applied any cooler. By contrast, the new ultra-white paint ensures the surface – even in the full glare of the sun – is significantly cooler than the recorded air temperature around it. In field tests, the surface temperature of a barium sulphate film was more than 4.5 degrees Centigrade cooler than ambient temperatures. The research paper describes this as “among the highest cooling power recorded”.

Passive cooling technologies such as this reduce the need for machines to dissipate heat. They are an increasing feature of building design. Li says that, in the future, ultra-white paint could be part of a suite of technologies that avoid creating emissions of their own.

It’s an exciting world of opportunity, in which a lick of paint may be all we need to ditch the air conditioning. 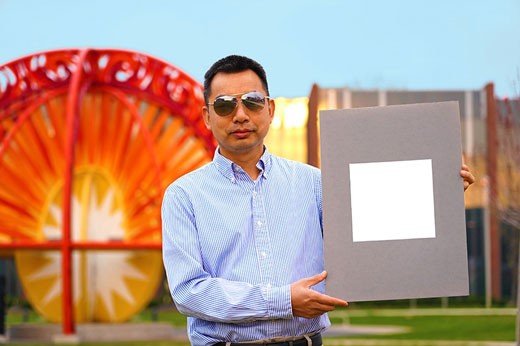 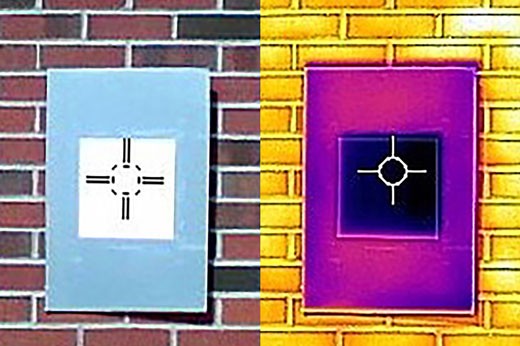 An infrared camera shows how a sample of the whitest white paint (the dark purple square in the middle) actually cools the board below ambient temperature, something that not even commercial “heat rejecting” paints do.
Credit: Purdue University/Joseph Peoples 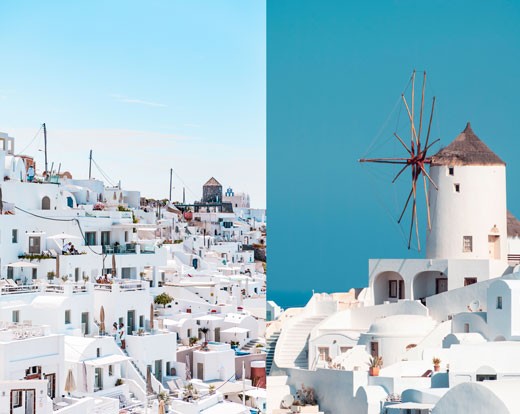